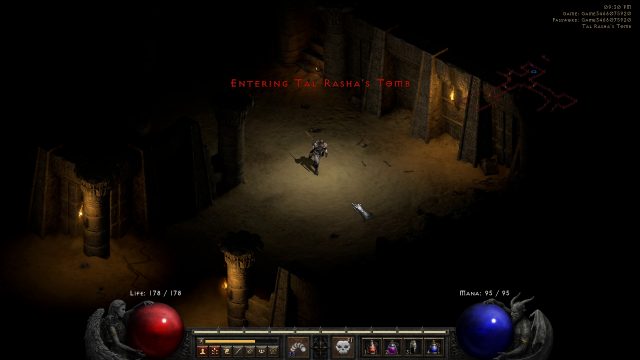 Where is Tal Rasha’s Tomb in Diablo 2 Resurrected

In the first quest in Act 2 – Radament’s Lair – you will pick up the Horadric Scroll. This will be your first clue towards finding the exact location of Tal Rasha’s resting place. To do this, you will need to assemble the Horadric Staff. This will lead you to the Claw Viper Temple, and later to the Arcane Sanctuary. It is in the Arcane Sanctuary that you will find the Symbol of the True Tomb of Tal Rasha. However, please note that this symbol is randomized on each playthrough, so the one featured in our screenshot may not necessarily work for you.

Reading the Horazon’s Journal in the Arcane Sanctuary will not just reveal the true Symbol (you will be able to find it in your quest log), but will also open up a portal to the Canyon Of The Magi. In here, there are Seven Tombs of the Magi. But, only one of these is the true tomb of Tal Rasha. Whenever you enter a tomb, even if it’s the wrong one, the game will inform you that you have entered the tomb of Tal Rasha. The true Tomb has the same symbol above its entrance as the one you discovered by interacting with the Horazon’s Journal in the Arcane Sanctuary. Enter it and use your Horadric Staff to activate the altar. And be prepared for a very tough fight, as you will need to battle Duriel.