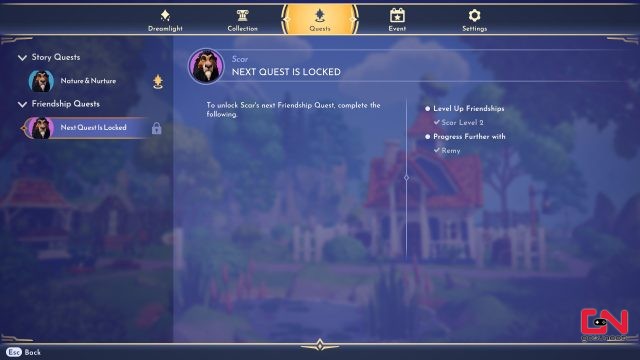 How to Unlock Scar Friendship Quest in Disney Dreamlight Valley

The main quests in Disney Dreamlight Valley are generally split into two main categories – the main story quest and friendship quests. Both of these types can be related to a specific character and their universe. With Scar, you can start his main story quest, Nature and Nurture, immediately upon interacting with him. However, his Friendship Quest remains locked even after you’ve seemingly fulfilled its conditions. And this is what has many players currently confused. The quest has two requirements:

Thus, you will need to complete Remy’s story and work on your friendship with Scar. Give Scar gifts and food in order to boost your friendship. Now, the real confusion comes after you complete both of these. That’s why you are probably here. Because, despite having both completed, the Friendship Quest is still locked. is this some kind of the Scar Friendship Quest glitch or not? Apparently, what you need to do is to complete the Nature and Nurture quest first. This is not stated as a requirement, but that’s what you need to do. Unfortunately, that means that you will need to wait a couple of days for the last step to be completed – “Tend the Orb of Nurturing until it’s fully restored“. After a couple of days, the Friendship Quest should unlock.