Don’t know where to find the Putrid Rat in V Rising? We’re here to help you! The vampire survival RPG has many unique bosses you’ll need to defeat in order to become the omnipotent vampire lord. Most of these bosses you will find in your Blood Altar. They are considered to be V-Blood carriers and by defeating them, you’ll collect their knowledge and powers. And all of them can be tracked via their blood scent. All but one – the Putrid Rat. Players are confused as they don’t know what to do in order to find the Putrid Rat and get the Rat Form. In this guide, we will tell you about the Putrid Rat location and how to find it. 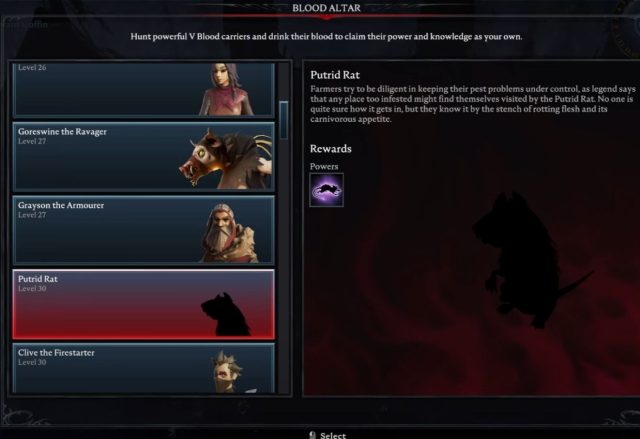 As we’ve already said, the Putrid Rat is the only one that can not be tracked with the blood scent. Not only that but players aren’t given any clues on what they need to do in order to find him. But, if you read his in-game description, you might get some idea about what we need to do. The entry states that any place “too infested might find themselves visited” by the rat. That’s right, we don’t need to search for him, he’ll come to us!

The first thing you need to do is to build a structure called a Vermin Nest. It can be found under the “refinement” section of the production tab and will cost you 360 stones and 120 bones. Once you have the structure in place, interact with it and you’ll see several refinement options. One of them is the Putrid Rat. For this, you’ll need the following ingredients:

Except for the Twilight Snapper, other materials are rather easy to find, and you can farm them all in the starting area. Look for Fish Bones in various bandit camps and treasure chests. Finally, for Grave Dust, you can grind bones in the Grinder or visit the Forgotten Cemetary. As you place them into the Vermin Nest, various vermins will gradually appear, which will eventually attract the Putrid Rat. He will be summoned 30 seconds after you put all ingredients. Thus, it’s best to be prepared before the fight.

PREVIOUS POSTV Rising Coarse Thread, How to Get