Minnie Mouse is one of the oldest – not to mention most popular – Disney characters. So it was practically a given that she would be one of the characters in Disney Dreamlight Valley. However, she was, along with WALL-E, the only character in the game that didn’t have a Level 10 Friendship Quest. That is, until now. The newest update to the game also added her quest. The quest in question is called “The Club Renewal” and it requires that you “Investigate the Glade of Trust for a long-lost banner.” So if you are having problems with it and don’t know how and where to find Minnie’s Banner in Disney Dreamlight Valley, we’re here to help you complete Minnie’s Level 10 Friendship Quest. 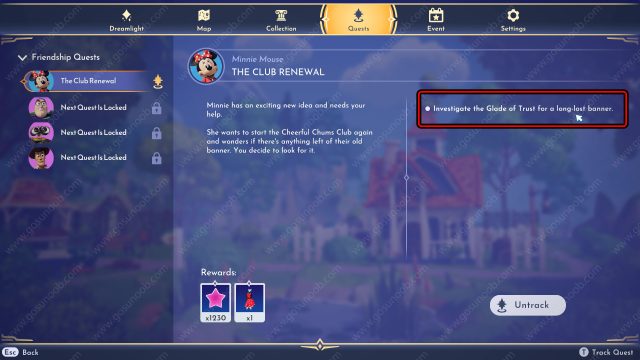 How to Complete Minnie’s Friendship Quest in Disney Dreamlight Valley

To unlock Minnie’s Friendship Quest “The Club Renewal”, you will first need to do the following: unlock Anna and Woody, Level up Minnie’s Friendship to Level 10, and unlock the Glade of Trust, Sunlit Plateau, and Frosted Heights biomes. After that, you will get a notification that you should talk to Minnie. Doing this will start the quest itself. What you need to do then is to find her missing Banner in the Glade of Trust. We have marked the exact spot where we found it in our screenshot gallery below. It looks like a rolled-up bundle of red fabric.

However, it appears that this step is bugged for many players. They either can’t find the banner, or it disappears once they do. If this is happening to you as well, there’s currently nothing you can do to fix this except to contact Disney Dreamlight Valley support. Once everything is working as intended, give the banner to Minnie. She will ask you to repair it. For this, you will need the following materials: x20 Fabric, x10 Gold Nuggets, and Red Dye. The Red Dye itself requires x1 Empty Vial, x2 Squid, and x2 Garnets. Once you have all of the necessary materials, use them to craft the Cheerful Chums Club Banner. Go to your home and hang it up somewhere nice. Minnie will thank you and reward you with her dress – Minnie’s Dinner Party Gown.