Bombs are one of the tools in Zelda Link’s Awakening. You can use them to damage enemies, but also to destroy walls. This usually reveals secret rooms, which can contain anything from rupees and equipment, to collectibles like the secret seashells and pieces of heart. Since you’ll probably encounter a cracked wall before you actually have any bombs, you might be wondering where to find them. This guide is going to show you how to get bombs & destroy walls in Zelda Link’s Awakening.

Where to find bombs?

The first free bombs we found in the game were somewhere around the fourth dungeon. You might have more luck with chests than we had, but there’s one surefire way to obtain these valuable tools. Go to the Town Tool Shop in Mabe Village – that’s the one with the earthenware pot on the sign above the door. The shopkeeper will offer to sell you ten bombs for ten rupees. It’s a great deal, and you should definitely take it.

How to destroy cracked walls?

Once you have the bombs, you can use them to break down cracked walls in dungeons. They reveal hidden rooms which often contain great treasure. For instance, the one we found in the very first dungeon lead to a chest with a secret seashell in it. Just hover over the bomb in your inventory, press X or Y to set it, then press the same button in the game in order to place one and light the fuse. If you change your mind, you can pick it up by pressing A – Link will promptly defuse it and place it back into his unknowable storage space. 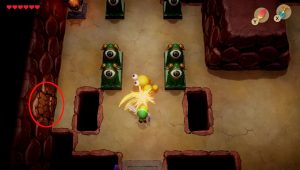 Make sure to stock up on bombs every chance you get – check stores, Trendy claw games, chests and every other place you can think of.