Yarna Desert is one of the areas in Zelda Link’s Awakening. It’s one of the last regions you’ll access, and you’ll need to do a bunch of things in order to get there. This includes getting powerups, befriending characters, completing dungeons and discovering secrets. If you don’t know exactly what it is you have to do, or how to do it, this guide will show you how to get to Yarna Desert in Zelda Link’s Awakening.

Where is Yarna Desert?

The desert is in the southeastern corner of the map, near Animal Village. In order to finally reach it, you’ll have to find a secret passage that goes under the river, a powerup that lets you break black crystals and a way to wake up the lazy walrus. 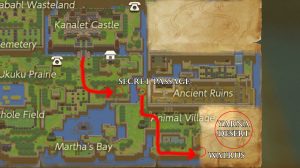 The secret passage is located in the forest south of Kanalet Castle. As you pass the signpost in the woods, be on the lookout for a shivering bush. Cut it down, and it’ll reveal the stairs. Once you go down, you’ll find a roadblock made of black crystals. The only way past them is to break them using the charging attack. In order to perform that, you’ll need the Pegasus Boots, which you get after completing the third dungeon.

Once you’re out you’ll soon find Animal Village. The sleeping walrus in the southeast will prevent you from reaching the desert, at least until you can wake him up. You’ll do so by bringing Marin there to sing for him. Once this is done, you will finally be allowed into Yarna Desert.

How to get Angler Key

When you reach the end of the desert area, you’ll fight a centipede boss in a quicksand pit. Avoid falling into the hole and defeat the beast. It’ll drop the Angler Key. If the key falls down into the pit, you can follow it and retrieve it from the floor below.

NEXT POSTZelda Link’s Awakening Dream Shrine – Where to Find Ocarina