Marin is one of the characters in Zelda Link’s Awakening. She’s the girl standing next to the parrot statue in Mabe Village, singing. She’ll teach you how to play the ocarina, but at some point, she’ll disappear. You’ll need her help to unlock a new area, and a number of folks are wondering where is Marin. If you’re one of them, keep reading our Zelda Link’s Awakening Marin location guide, and we’ll show you where to find her and how to move the sleeping walrus that’s blocking the road to the desert.

After Marin disappears from Mabe Village, you might hear from the other villagers she likes to be alone on the shore. If you’re at Mabe Village, go south to the Toronbo Shores, then head east along the coast. You’ll find Marin in the secluded area at the end of the beach.

How to move walrus?

If you’re looking for Marin outside Mabe Village, you’ve probably already seen the sleeping walrus blocking the road in the southeast. He is one of the obstacles on your way to the Yarna Desert, so you’ll need to move him. Thanks to his gratuitous girth, you can’t really pick him up and move him about. When you interact with him, you’ll see an icon with a head that resembles Marin. The hint is pretty clear – you need her help. After you’ve found her on the beach, bring her back to the comatose colossus and let her do her magic. 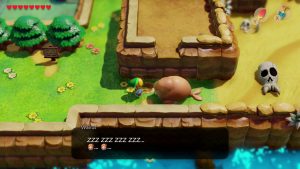 This is only one of the key persons or items you’ll have to find in order to finally reach the fabled desert. It’s going to be a long and arduous journey, so if you get stuck at any other point, check back to see if we’ve written about the solution.