Griffon is a secret mount in Guild Wars 2’s latest expansion, Path of Fire. There’s a list of tasks you need to perform if you want it, and it’s pretty hard to find. Riding it is the closest you can get to flying. We’ve gathered all the info we could find on it, so we could write a GW2 Griffon secret mount guide.

How to get Griffon hidden mount?

Here’s what you need to do if you want the Griffon mount:

Once you’ve done all of the above, you’ll unlock five collections. They require you to amass griffon eggs from various areas, as well as vendor items from the stablemasters and mount trainers. The value of these items is around 250 gold. You’ll be able to borrow a griffon right away, and the game will even mark griffon roosts on your map – these are nests where you can pick up your temporary griffon mounts. After you’ve completed all 5 collections, gathered the Spearmarshal writings and defeated the boss, you’ll get one permanently.

This collection has five griffon eggs and three other items. The eggs are strewn across the first area, usually in high places. Two of the other items are bought from vendors, while the last piece can be obtained as a reward for a legendary bounty: 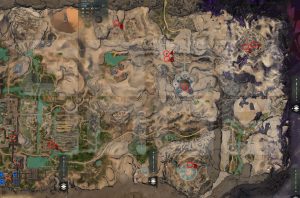 Warmed Coastal Griffon Egg
This egg (4) is on top of a mountain northwest from the temple at Elona Reach. You’ll need a fully upgraded springer to reach the top. You’ll meet resistance from the local dust mites, but you can safely ignore them if you’re not willing to fight.
Ridged Coastal Griffon Egg
You can get this one (5) mere seconds after collecting the warmed one – it’s within arm’s reach of it, on the side of the cliff. Simply descend the side opposite the one you climbed, the one that overlooks the temple. Drop down until you see a ledge.
Browned Coastal Griffon Egg
This one (6) is in the northwestern corner of the Hatari Tablelands. You can either climb up there using a springer, or borrow the griffon from the nest at the previous location.
Lustruous Coastal Griffon Egg
This egg (7) might not be particularly hard to find, but it’s definitely hard to reach. It’s hidden in the Maculate Fringe. To get it, you’ll need to climb to the top of the floating stones. There’s not much space to stand here, and one miss might force you to start over. Just be patient and rely on your giant bunny-kangaroo.
Dusty Coastal Griffon Egg
For the final egg (8), you’ll need to head to the ancient temple in the south of the map, west of Destiny’s Gorge. The griffon nest is atop the temple. We got to it by jumping as high as possible up the surrounding rocks, gliding to the temple’s lower ledge, then abusing the springer’s jump to get up top.

This area is home to five griffon eggs just waiting to be snatched from their nests. There are also three other items you need – two available at shops, one as an event reward: 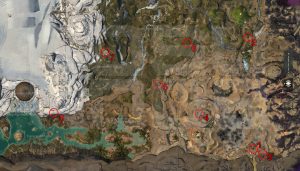 Crusty Mountain Griffon Egg
This griffon egg (4) is located at the top of the mesa at Salt Flats, northwest of Diviner’s Reach. Once you’re there, you’ll see six stone pillars around a bonfire spot. The egg is on the top of the western one – use your springer to get there.
Warmed Mountain Griffon Egg
This one (5) is on the ridge between Salt Flats and Brightwater Inlet, a bit to the north. It’s near the hanging bridge. There’s also a griffon you can borrow here, which you can use to get to the next one more quickly.
Vibrant Mountain Griffon Egg
You can get to this one (6) simply by following the ridge to the north. You’ll find the egg a bit south from the canyon you need to cross when first arriving at Highjump Ranch, east of Auburn Hills.
Rough Mountain Griffon Egg
You can find this one (7) north of Windshear Scarps, on the edge of a cliff. It’s near one of the roads that lead into the snowy areas. You can get there by following the road west from Highjump Ranch, or by going down the cliff to the southwest, then climbing the giant stairs near the Scraps.
Damp Mountain Griffon Egg
This one (8) is probably the hardest to find. It’s in the southern part of the snowy areas, a bit southeast from the Enchanted Bluffs. You’ll have to shimmy along some tight ledges in order to get it, then glide blindly for a short while.

There are only three griffon eggs in the Elon Riverlands, but you’ll have to work harder to get the rest of the items. This includes three runes, one of which has a mini-quest of its own. 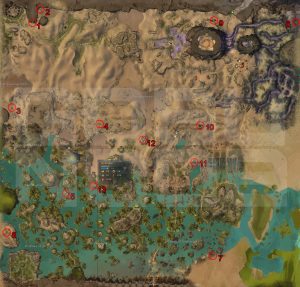 Azure Riparian Griffon Egg
This egg (11) is located near the top of the ruined tower at Arid Gladefields. Having mastered the springer isn’t essential, but it’s definitely helpful. Especially if you slip and have to take fall damage.
Warmed Riparian Griffon Egg
You’ll find this one (12) in a nest on the rock outcrop north of Vulture Drifts, about halfway between Arid Gladefields and Skimmer Ranch. You can borrow a griffin there, to help you get to the next one.
Rocky Riparian Griffon Egg
The griffon will help you get near the last egg (13), but it won’t get you to it. You’ll need the springer’s high jump to get onto this tall rock column, just a bit southeast from Skimmer Ranch. 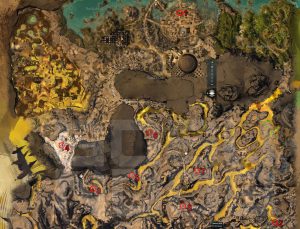 Mottled Canyon Griffon Egg
You’ll find this egg (5) at the foot of the mountain east of the Darklands waypoint, in the northeast part of The Ruination. It’s on a cliff surrounded by wooden scaffolding. There are a bunch of elementals patroling the area, but they can be avoided.
Pale Canyon Griffon Egg
Follow the dark mountain after you get the previous one. The egg (6) is hidden on top of a stone spire next to the eastern cliffs, in the Scourgeway. The area is guarded by mummies, but you’ll need to jump anyway, so you needn’t concern yourself with them.
Dark Canyon Griffon Egg
When you get the previous egg, follow the road south from the Scourgeway. Cross the bridge and start looking for a giant stone ring. Your egg (7) will be on top of it.
Warmed Canyon Griffon Egg
After you’ve snatched the one from the stone rings, go back to the road and countine southward. Climb past the oriental ruins, and look for the nest with the egg (8) on a ledge with some pillars, overlooking the stone rings.

We’re back to the usual format – the Domain of Vabbi collection consists of five eggs, one rune and two other items. It’s the last collection you need before you can proceed with getting the coveted mount. Since the terrain in this area is pretty inacessible, you should probably make use of the griffons at the Sanctuary (teleport there using the Spearmarshal’s Plea, then borrow a griffon).

Once you’re done collecting all the goodies, you’ll return to the Sunspear Sanctuary and place them all on the pedestals. You can’t make a mistake here – the game will place them in the correct spots. The Last Spearmarshal will then give you another to-do list, this time with books – ten tomes of Writings of the Last Spearmarshal. They are hidden in the Library of the Tomb of the Primeval Kings. Activate the portal, go into the Library and start killing the elite mobs you find there. They’ll drop keys – you need ten of them, one for each chest. The chests are scattered around the room, but shouldn’t be too hard to find. There’s no map to help yu here, so make sure your search is thorough. When you’ve completed the collection, go back to the Sunspear to activate the last step.

Open Skies: On Wings and A Pray

The last step is basically just one big boss fight. The only trick here is that the boss will become invincible several times during the fight. When this happens, jump on one of the nearby griffons and use his attacks to break the invincibility. After that, you can continue spamming your regular skills. Repeat this several times, and the boss will drop dead (for good this time), and you’ll get your own griffon mount.

The griffon is basically a glider for people who don’t own Heart of Thorns. Except it’s much faster, and can jump while gliding, letting you correct your altitude. It comes with its own set of masteries (thanks Jordan).