Path of the Gods achievement in Guild Wars 2: Path of Fire is one of many achievements you can get. The reward for completing it is seven achievement points and one mastery point. Getting it requires you to kneel at the statues of each human god. In this guide, we’ll show you where to find all seven Path of the Gods statues in the Desolation map and perform a /kneel emote to obtain the achievement. 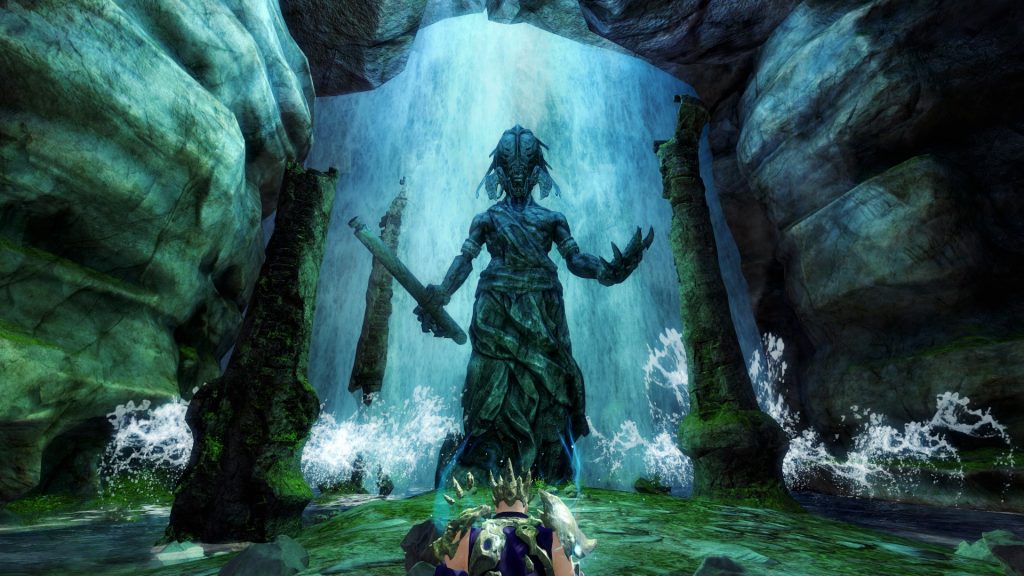 Where to find Statue of Kormir?

Kormir is located in the northeastern part of the Desolation. From the northernmost waypoint, head east to the Silent Vale area. In the northern part of this zone, there is one larger peninsula. Go toward its central part, where the Blind Faith PoI is, and you’ll find the statue.

How to get to Statue of Abaddon?

This one requires the Jackal mount level three mastery learned. The portal you need to go through is located in the northeastern corner of the Desolation. It is found just east from the Silent Vale and Kormir’s statue. In this area, you’ll spot a lot of waterfalls. Head to the one that is furthest south. There is a hill south from it. From there, you can jump and dash toward the portal with your Jackal mount. Abaddon is inside the secret room, just behind the waterfall.

Grenth is found in the central part of the Desolation. Follow the road from the Scourgeway Waypoint to the west. Next to the road, once you start climbing up, on your right, there is a smaller platform with the statue.

Balthazar’s statue is located in the central part of the Desolation map. It is just down the road, to the west of the previous statue. If you zoom the map out a bit, just so you can see its name, the exact location of the statue is under the letters “ti”.

Location of Statue of Dwayna

The first statue on the list is found in the northeastern part of the Desolation. Follow the path north from Sand Jackal Run Waypoint, across a couple of islands, up to the brown part of the land. There are some gate ruins nearby, and you’ll have to jump on this platform, as it is a bit higher than the nearby yellow river.

Where to find Melandru Statue

The statue of Melandru is found in the southwester corner of the Desolation map, in the area marked as Broken Shelf. From the southern Sand Jackal Run and its Waypoint, go toward the northwest. The goal is to reach the northernmost poisonous pool in Broken Shelf. The statue itself is just northwest from Bleached Pillars PoI, on the lower section, next to the edge of the map. If you are at the statue of Dwayna, just keep going west, and you’ll end up close to Melandru.