Advanced Monster Weather deck contains Gwent cards that are a bit expensive to craft, but synergize with the idea of this deck very well. It is supposed to help you compete all the way up until you start facing decks with many Legendary cards. The idea behind the deck is to use weather cards to debuff your opponents’ units and prevent his/her on-board power from spinning out of control. Monsters do well with weather cards because they have a lot of units that are immune to weather or create weather effects themselves. The main strategy is for you to keep your weather cards until the very end, so you can remove the highest power units from play. This version of the deck also uses Nithral as another combo giver. In this guide, we’ll talk about different strategies versus different factions and an overall way you can play this deck. We’ll also talk about mulligan strategies and card replacements you can make. 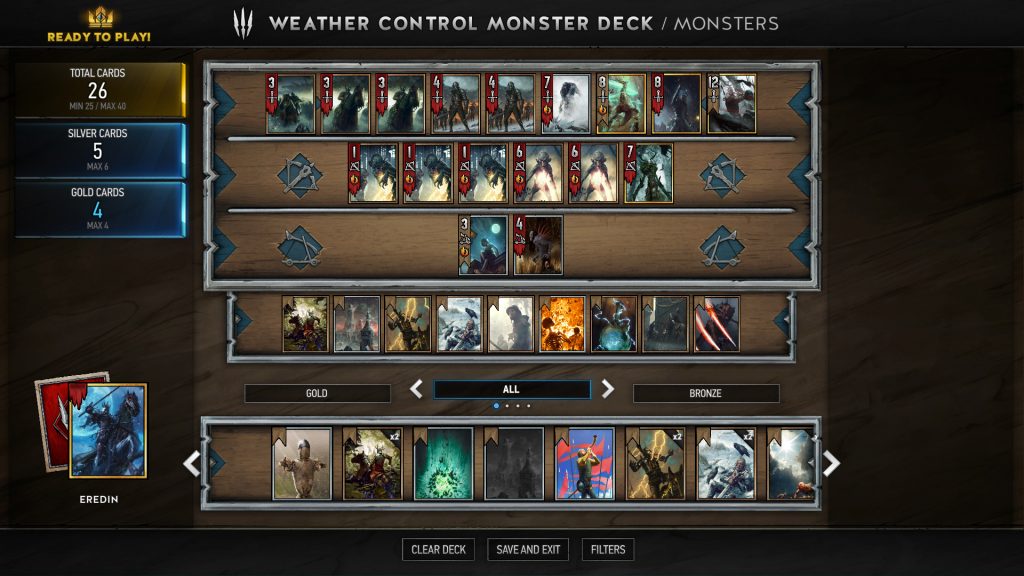 This version of the Monsters Weather Control deck is somewhat costly. It’ll take about 1.670 extra Scraps to craft everything you need. You might get some of them from opening kegs, but you’ll probably have to do some serious crafting. Still, it’s worth it. Here is the list of cards for this deck.

You want to remove all Foglets from your starting hand. You also want to have one Impenetrable Fog card in your hand and an Ancient Foglet. The rest of the cards are situational. Against Northern Realms and Skellige you want to keep the Water Hag and Torrential Rain so you can counter their buffing spawns in the Siege row. You want to have only one Wild Hunt Rider in hand and preferably as many weather effects as possible. The more weather you can spawn in a match, the more chance you have of winning. You want to have the opportunity to play at least two Frost and two Fog effects, with Rain being necessary depending on the matchup.

You have to be very careful about the strategy with this deck. You want to have weather effects to remove the highest threats at the right time. The usual match flow for me goes like this … The first round is playing Ancient Foglet first and then playing Fog. Why is this important? You want to get those Foglets out of your deck ASAP. It is catastrophic to draw Foglets at the beginning of round two or three. These three cards put 10 power on the board (which is not much), but they debuff the opponent’s ranged units and your Ancient Foglet keeps growing in strength each turn. After that, you can actually switch to your Melee row units with Wild Hunt Riders and Wild Hunt Warriors. Try playing Warriors when you can ping opponent’s units out of play. Depending on your opponent’s strategy, you can play another weather card, but keep in mind you have to have two different weather effects for later. That is why White Frost is a perfect card to leave for rounds two and three. Playing two weather effects in the first round and having two more for later will bait your opponent into thinking you have no answer for later and make him pass the first round too early.

If I win the first round, I usually play the standard Monster combo – Eredin + Ciri. You want to lose the second round this way. You’ll get Ciri back and Eredin stays on the board because of the Monsters’ faction ability. This gives you a card advantage. However, this strategy is riskier since the patch, but it can still work. Your opponent still has to play some cards to catch up. The third round is played so that you hold off on the weather effect card that will cripple your opponent the most. Stammelford’s Tremors is also a great card to be played close to the end of the match – so you get as much value as you can out of it. Play Tremors before the last moves only if the opponent has a large number of low-strength units on the board so you remove them entirely before he buffs them beyond where removal is an option.

Sarah is a great card to be played either in round 1 to bait your opponent’s Scorch or win the first round. It is also great to have in round 3 when you will most likely play all your weather effects. If she gets scorched, you can still put Ice Giant forth, which the enemy can’t remove anymore. Sarah and Ice Giant go well together as they are both removal bait and once one of them is out of play, the other is free to grow. A great last round would be Sarah, Caranthir, Woodland Spirit and another weather card you keep for dealing with a specific faction.

You want to prevent NR from buffing and promoting strong units. This means you want to have a lot of weather cards in your hand and cast them just before they do their final combo moves. You want to have Rain effects and Frost effects the most. Ranged is not a common build for NR. If you face many Trebuchet NR builds in the meta, you change your deck to have less Foglets and more removals.

You want to keep Rain and Frost effects for Skellige. Rain is kept for the last round, when they start their resurrect train. Frost is essential against Clan Tuirseach Skirmishers and is also to be kept for the last moves of the last round. Since they usually count on the third round being the strongest, you need to not overextend yourself in the first two rounds. Use Fog and Sarah to stay competitive in the first round. One Frost is good to neutralize their big advantages there.

If you have a mirror match, you have to count on your Woodland Spirit and Caranthir being more powerful than the opponent’s hand. I usually Lacerate the opponent’s Foglets and buff mine. If you see him going for the standard Monsters combo (play big units + pass), try throwing Fog real quick. This will get his Foglets out of the deck as well and considerably lower the chance of him keeping a high-powered card on the board. If you play against Monster Nest breedable decks, make sure you have Tremors to remove his units after he casts the first Monster Nest.

There are two awesome Legendary cards that improve this deck immensely. I would actually not play this deck without them. The first is Dagon – one of the Monster leaders. Having him frees up space in the deck of one weather card. He is also very useful because you have the appropriate weather card at any time. The only downside to Dagon is that you opponent knows you are playing a weather deck as soon as the match starts. No one plays Dagon as leader unless they are doing a Weather deck.

Another wonderful legendary card addition is Nithral. He goes great with many Wild Hunt units you already have in the deck. Play Nithral, follow up by Caranthir and you put Frost down and do three damage to opponent’s units, potentially removing stuff from the melee row. Play one Wild Hunt Rider to get the others out of the deck and do three more damage to opponent’s units. His downside is that he is Silver and susceptible to Scorch, so you have to play around that (a great unit to be played after your Ancient Foglet reaches 8).

You might also want to have Merigold’s Hailstorm in this deck. Every special card that spawns two or more weather effects is extremely good. Do keep in mind that you can have only 6 Silver cards, so having multiple two-weather cards might not be an option. Same goes for Ragh Nar Roog, which is a perfect card for this deck, but is expensive and takes up a Gold spot.

Even though this deck can be improved by adding Legendary cards and two-weather cards, it’s very powerful as it is. It’s extremely difficult to counter, since not many people have tech cards against it. The biggest threat you may encounter is a stronger Weather deck. So, enjoy playing this deck in Gwent closed Beta.

NEXT POSTRune Crafting – How does it work | Dishonored 2