CD Projekt Red were present at this year’s Gamescom, showing off the standalone version of Gwent to all interested parties. We were quite interested, so we sat down and played a few rounds of the remade card battle game. We also attended a hands-off presentation of the singleplayer portion of the game. Read on if you’d like to know what we thought of the early build that was on display. 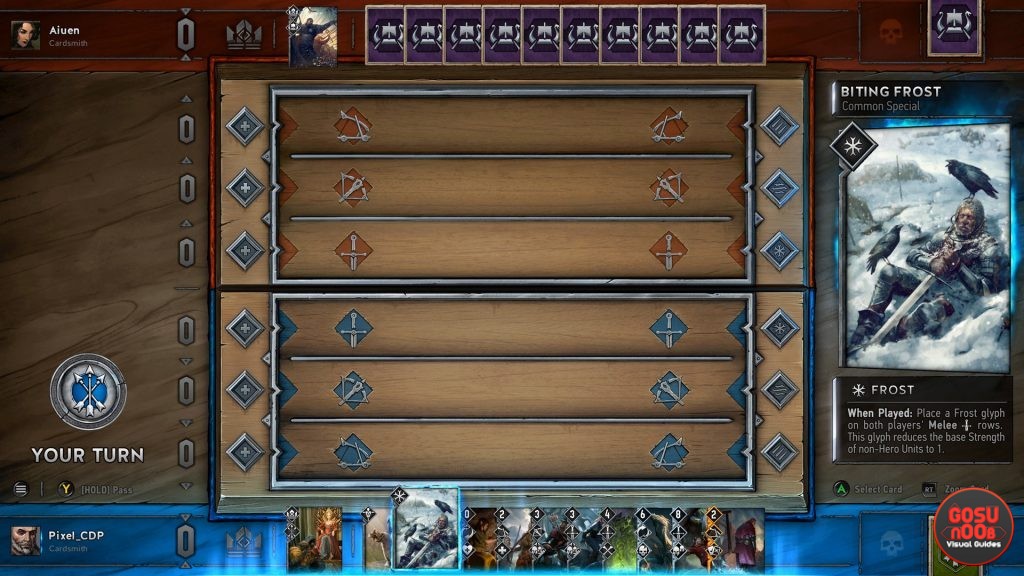 Before we could start battling other members of the press, we were shown a brief presentation. One of the developers talked at length about the positive response the Witcher 3 mini-game got, and how that inspired them to create a standalone version. Afterwards, she explained the rules of the game for the uninitiated, before getting to the meat of the matter – singleplayer.

There will be several campaigns, each about 10 hours in length. We later learned (during our interview) that these are going to be paid add-ons. Each will tell a tale of a different group of characters on a journey. The campaigns will contain untold stories in the Witcher universe, with fresh, new characters, written by the same people who worked on the script for The Witcher 3.

The first thing we see is a cutscene from between battles, and it’s… not great. It’s all pencil sketches and bland colors, like someone spilled a glass of tepid water over a scene from Darkest Dungeon. As soon as the game proper starts, it’s much better – you lead a single character on the overworld map, exploring and triggering events. The events play out through text, sometimes letting you choose how to proceed. In the demo we saw, the player decided to take a figurine from an ancient temple, which inflicted a party member with a curse.

The choices you make during these story events may lead to battles, which is when things get really interesting. The decks you use during the campaigns will be separate from the ones used in multiplayer. The only way to expand them with new units and items is by exploring the world and taking part in the events you stumble upon. The battle we saw during the demo was between Geralt and a cursed party member. The latter became the leader card of the enemy army, while Geralt temporarily lost him from his deck.

After the presentation was over, we were pitted against other media-types. Luckily, my opponent was at the same wavelength as me – he had played Gwent a lot way back when, but hadn’t touched it in more than a year. We both knew the principles, but couldn’t tell the new cards from the old ones. 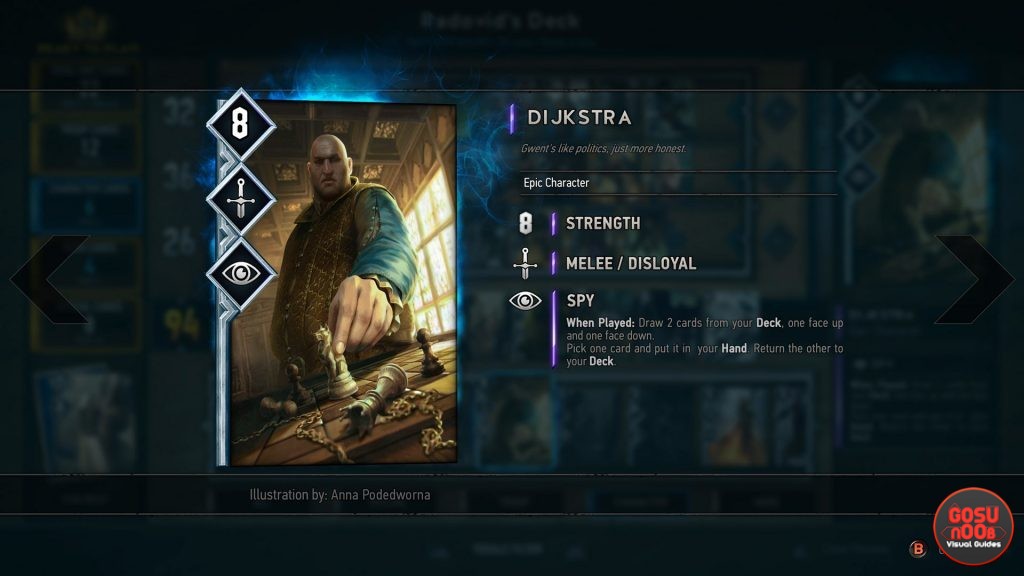 This, as it turns out, was in part thanks to the severe rebalancing the game had received. Most of the old cards have been tinkered with, much of them changed beyond recognition. For instance, spies now have high Strength, to make up for their card-drawing trait. It was obvious after only a couple of minutes this wasn’t The Witcher 3 Gwent anymore. Thank goodness for that.

The original version was a fun break from monster killing, but let’s face it – it had no chance of making it on its own. The developers at CD Projekt Red were obviously aware of this themselves. The build we got to play wasn’t so much an update as it was a reimagining. It felt, for better or worse, a lot like the early days of Hearthstone – people trying to find their foothold in the game, hoping for a moment of epiphany while there are still cards in their hands.

There were four pre-made decks to choose from, one for each of the factions – Skellige, Northern Realms, Scoia’tael and Monsters. This time around, the factions actually feel different – Skellige is all about resurrection (pulling cards from the discard pile), while the Scoia’tael rely on deception (units that change rows on a whim and such). The Monster decks will make a big deal from manipulating weather conditions on the board and having bonuses that activate during bad weather. The Northern Realms seem the closest to their originators, using numbers to make up for what they lack in skill.

And it all looks rather dashing. The original Gwent looked decent enough on its own, but it’s completely pitiful when compared to the new one. The UI has been revamped to show a lot more info, animated cards have been added (as a premium variation) – think less tavern-based pastime, more glamorous wizard-sport. The closed beta is going to kick off on October 25th (at least on PC and Xbox), so you’ll have a chance to a take a look yourself soon enough. We heartily recommend you do.