Northern Realms Cheap Buff OTK Deck in Gwent is an attempt to create a deck that has enough power in the first round to finish the match right there and then. It has a lot of weaknesses, but when it works, it will give you a lot of power and win you the match. The strategy is to buff the units, make them resilient, copy them and make them gold. This is the cheapest version that we can make work. It works under the assumption that you’re playing the closed Beta and that you’ve got some starter cards in the basic deck included in the closed Beta. This deck will be good in your first fifty to a hundred matches.

This version of the deck focuses more on being affordable, rather than the best possible Northern Realms OTK Deck. It really only works against lower-level decks. More powerful decks will have an easier time blocking your combos. However, it is very effective against the Pass First Round tactics of the Monsters faction. 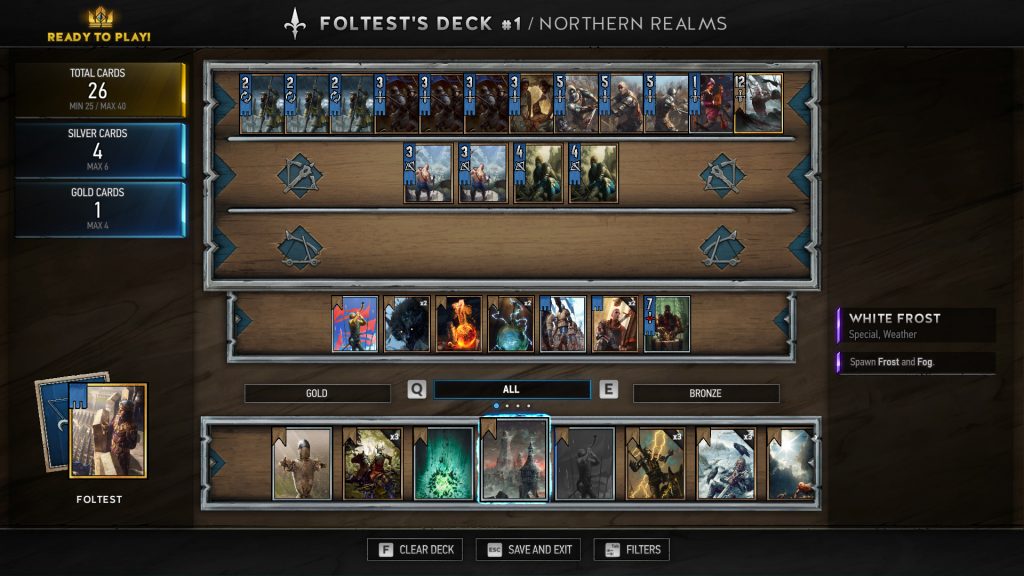 The deck contains 26 cards and you already have a lot of them in your starter deck. It costs around 1.820 Scrap to build from scratch. However, taking into account the Northern Realms cards that you already have, the total Scrap cost goes down to 760 Scrap. On top of that, you’ll probably get most of the cards you lack from opening kegs. If you want an even cheaper option, you can craft one Redanian Knight or one Dun Banner Light Cavalry unit instead of three Blue Stripes Commando units. However, the Commandos are the better option.

You can check out all of the cards in this deck below.

The mulligan is very important for this deck. At the start of the match, you’ll want one Poor Infantry and one Blue Stripes Commando. You absolutely must have one Promote and one Adrenaline Rush in your hand. Otherwise, it will be very difficult.

You’ll also want to have one Reaver Scout, one Blue Stripes Scout, and at least one Kaedweni Siege Support.

Try to have Commander’s Horn in your hand. If not, consider using Prince Stennis to try and get it.

Reinforcement can save you in a pinch, and is very good to have in your hand.

This deck revolves around the combo of buffing and promoting your units. You play a unit, and then you buff it to make it stronger. Then you put Adrenaline Rush on them so that they will stay on the board after the round is over. After that, you create a copy of the card using Foltest’s ability. You finish the combo with Promote. This makes the units Gold and they become immune to most debuffs. They also get +2 strength each because of the Northern Realms deck ability (every gold card gets +2).

The focus is mainly on the Poor Infantry, but it can be shifted to Blue Stripes Commando if necessary.

The point of the Northern Realms OTK Deck is buffing and promoting your units. It hinges largely on baiting your opponent to pass the first round. You want to start slow and give your opponent the advantage. This is why Prince Stennis is a very useful card and a good opening card. It gives your opponent more power while allowing you to draw an extra card you may need. You want your opponent to pass as early as possible, otherwise playing your combo will be very difficult. You can follow this up with Blue Stripes Commando to bait a reaction from the opponent and hide your real combo.

Whether or not your opponent passes, you have to set up your combo. Play your Poor Infantry. Follow it up with whatever buffs you have. Try to buff your Infantry asymmetrically to avoid Scorch. Preferably, you should begin with a Blue Stripes Scout or Kaedweni Siege Support, then play a Reaver Scout or Reinforcement on him. Save the really big buffs, such as Thunderbolt Potion and Commander’s Horn for last.

After you’ve played all of your buffs, use Adrenaline Rush on your strongest unit. Then create a copy of that unit using Foltest. Finally, use Promote on the row. If done correctly, this should give you three very powerful Gold cards that will stay on the board for the next round. This is the moment to pass the round.

If the opponent breaks your Poor Infantry combo by wounding them or removing them entirely, you can play Blue Stripes Commando if you still have it, get another from your deck using Reinforcement and complete the rest of the combo on them. You basically want to have as much power as possible on the board before you promote, so play accordingly.

If the opponent really has an advantage over you, you can decide to pass the first round. You’ll want to do this very early, so that you have enough buffs to continue in Round 2. However, if it’s at all feasible, try to win the first round.

The strategy for the second round, if you’ve won the first, is simple. Play out the rest of your hand and wait, or just pass immediately if you have no units. In the ideal scenario, the opponent won’t be able to catch up and will forfeit or lose. It’s bad news if the match goes over to Round 3.

In case you haven’t one the first round, use Field Medic to resurrect a unit from the Graveyard, or play another Poor Infantry or Blue Stripes Commando and start the combo over.

The third round will be very tough since you’ll be working with basically nothing. With any luck, you might get one more unit from the draw. If you still have your Field Medic, you can get some more power on the board. If everything went well, your opponent should be down to his last card as well. Either way, that last card will be the deciding factor and it’s all a matter of luck.

You can modify this deck further, depending on your Scrap (and overall) budget.

As mentioned before, the Blue Stripes Commando units can be replaced with Redanian Knight or Dun Banner Light Cavalry units. However, while cheaper, these units don’t have the self-boosting ability of the Commandos.

John Natalis is an excellent card to add here, since he can boost 3 friendly non-gold units.

Reinforced Trebuchet units can substitute Blue Stripes Commandos. They deal damage to the opposing non-gold units with every two turns. However, they are very expensive.

Ciri is always good to have in any deck. She doesn’t synergize too well with this deck, but playing her in Round 2 and having her come back to your hand for Round 3 if you lose might save you.

This deck can be improved upon by adding more expensive and efficient units and buffs. However, taking into consideration that this deck can be easily countered, especially by more experienced players, it’s not necessarily wise to invest too much into it. Stick to this deck until you can build a better one, around a different strategy. We hope you will enjoy playing this deck in Gwent closed Beta.

NEXT POSTHow to craft runes in Dishonored 2