The Skellige faction in Gwent has powerful resurrect synergies and a special power-buffing card that helps you create a deck that has one of the most powerful third round boards. In this guide we’ll talk about the card list required to create this deck, combos and strategies on how to play it and special conditions you have to look for. The main goal of this deck is to play Clan Tuirseach Skirmisher cards and then permanently buff their original power with Clan Tordarroch Shieldsmiths. This is to be done in the first and second rounds, with the goal being to resurrect Clan Tuirseach Skirmishers in the third round and buff them beyond the possibility of losing. You play this deck to force your opponent to play as many cards as possible in the first rounds and finish him off with the winning combo in the last round. This version of the deck is not too expensive (contains no Legendary cards) and it is effective all the way up until Legendary decks. 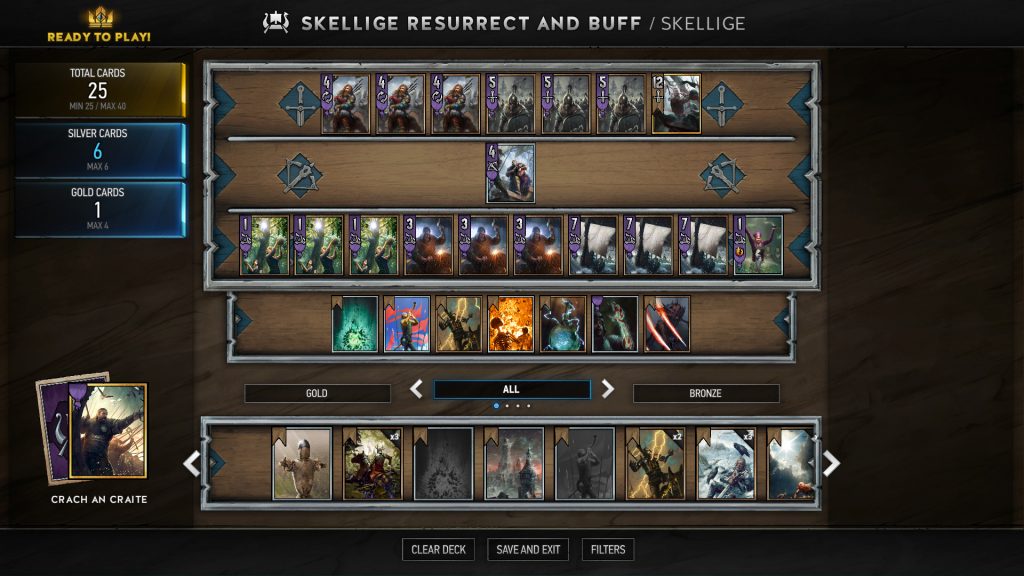 The Skellige Resurrect and Buff deck consists of 25 cards. It costs about 830 additional Scraps to build, assuming you don’t get any of the cards you need by opening kegs. It’s pretty unlikely that you won’t, however. Take a look at the complete card list for this deck below.

You need to have one Clan Tuirseach Skirmisher in your hand and preferably two Clan Tordarroch Shieldsmiths. You also need at least two resurrection cards (better if they are units than specials) in your starting hand so nothing is left to chance.

All the other cards are optional, with the priority of staying in your hand going to at least one Light Longship or another Clan Tuirseach Skirmisher, followed by one Clan Heymaey Skald and more Priestesses of Freya. Removal cards are also fine to keep. Against weather decks, I would keep Dimeritium Bomb as the last card you’ll play in the game.

Your goal is to permanently buff your Clan Tuirseach Skirmishers in the starting rounds and do a resurrect train in the final round. Tuirseach Skirmishers have their base power buffed when resurrected, which makes them very hard to deal with in the end. Your first round should begin with you playing at least one Skirmisher. Follow that up with the Shieldsmith‘s buff. If you opponent removes the Skirmisher to your graveyard and you have 2 Priestess of Freya, use one to resurrect the Skirmisher. This will force your opponent to spend more cards to remove a now buffed Skirmisher. If he does not end up in the graveyard, follow up with Light Longships. This will, again, make your opponent play his removal cards or units to match your strength on the board. Chances are high that you will be able to win round one or have card advantage to win round two. Round two is played in similar fashion to round one. You only want to do the resurrect train if you are going for the victory. You want to win one of the first two rounds by playing Longships and removal cards. Always keep one resurrect card in your hand for the last round to do the res train, which should help you overcome any opponent, because they will not have many cards in their hand either. Clan Heymaey Skalds are used to help you win one of the first rounds.

Weather decks can effectively reduce your overall board power. This is where Longships are handy and you can actually decide to res them and permanently power buff them instead of Skirmishers, because they can’t be affected by Rain. You should also keep your Dimeritium Bomb as the last card played vs weather control. This will remove the opponent’s buffs and get your “original power buffed” powerhouses back to high numbers. Your Skirmishers will surely be debuffed and sent to the graveyard, but this all plays well into your basic strategy so don’t fret and just keep making your opponent spend as many weather cards in the initial rounds so you can win with your 3rd round comeback.

You want to keep your buff cards to have more power than the opponent’s combo. You should be able to create a couple of power 14 Skirmishers in round 2, which you can then buff even further with Commander’s Horn and Clan Heymaey Skalds. This should give you enough power to beat his combo and going into the third round win with Sigrdrifa or at least one Priestess of Freya.

You can have the Prize Winning Cow in your deck to help you win one of the first rounds. Any recycle card to help you draw into your full combo is ok to have in the deck as well (Svanrige, for example).

Valuable cards that synergize with this deck are also Draig Bon-Dhu and Morkvarg. Morkvarg is a legendary card (800 scraps cost), but plays great with the original power buff and makes your opponent spend a lot of cards for debuffs and removal. The problem is which cards to exclude? You can only have less Light Longships or Clan Heymaey Skalds. Thunderbolt potion is also not essential, but I would rather have either one of the potions.

Another valuable card that goes well with this deck is Decoy. Since it allows you to take a non-gold card from your side of the board back to your hand, you can extend the resurrection train by one. Simply use the Decoy on a Priestess of Freya. It’s also useful with Clan Heymaey Skalds and Clan Tordarroch Shieldsmiths for some extra buffing.

This is a solid all-around deck with not many pitfalls. It is a good option to play in the Gwent closed Beta and can be helpful in both early levels and mid-ranged fights.