Gwent is a card battling game set in the The Witcher universe. It pits two players against each other in a battle of wits, numbers and bluffing. In some ways, it is similar to Hearthstone. In others, it’s vastly different. Getting into the former while having a background in the latter can be difficult. We’ve been playing the closed beta since it started, and we’d like to offer some Gwent tips for Hearthstone players, to ease the transition for those looking to switch. 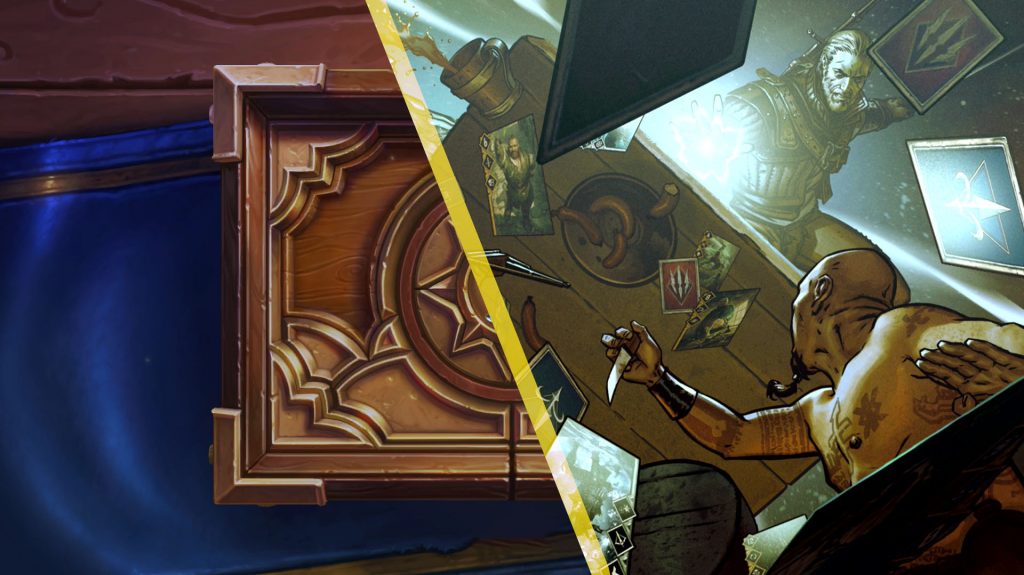 Gwent is played in best-of-three matches, with every match consisting of up to three rounds of combat. You don’t actually attack the enemy, like you do with a hero in Hearthstone. Instead, you just place cards on the board, amassing Strength, and whoever has the most at the end of the round wins. Having three rounds in a match creates an interesting dynamic – you can lose a round on purpose in order to get a card advantage.

The table is split in half, but each side is further divided. Each player’s side has three rows – melee, ranged and siege. Certain cards can only be placed in one of the three, while others allow you to choose where to put them. The battlefield still feels whole, it just introduces more opportunities later on, letting you target specific rows.

Factions are Gwent’s equivalent of classes. There are four of them at this point: Monsters, Scoia’tael, Skellige and Northern Realms. At least one other will be added at a later date. Each of them has a distinct flavor, and every deck can be enriched with neutral cards. Each faction has a leader, which is like a hero – they have an ability that can be triggered once per match, often turning the tables entirely. As you progress, you’ll discover new leaders, who will allow you to further customize within factions.

Special cards are basically spells. They can take many forms – potions, weather effects, specific attacks, etc. When all is said and done, they act the same way as spells – playing them will have a unique effect on the board. This ties into the table segmentation nicely – some spells affect only specific rows, giving you a reason to think about grouping your units.

You’re not going to draw cards that often in Gwent. What you have in your starting hand will be most of what you’ll get. You’ll draw a few cards after each round, and there are some special cards that allow you to draw more (either from your deck, or from the graveyard/discard pile), but your starting hand is incredibly important. Be very careful when redrawing cards from your it.

Gwent has a minimum and maximum number of cards a deck can hold (25 and 40, respectively). Having more cards in your deck means more opportunities, but it also means lower chances of drawing any one card. If you’re basing your tactic on drawing specific cards, you should try to keep the card count low.

There are four rarity levels of cards: common, rare, epic and legendary. These don’t affect deck-building in any way – they only signify the chances of finding them. On the other hand, you have three tiers – bronze, silver and gold. These do tie in with creating decks – you can only have 6 silver and 4 gold cards in a deck.

They’re both booster packs, and they’re pretty much identical. Kegs will give you five cards, one of which is guaranteed to be at least epic. You can buy them using Ore, the in-game currency, or actual money.

When you open a card keg, you’ll get four set cards first. After you’ve inspected them, you’ll get a choice between three for your fifth. You can only choose one here, the other two will be discarded.

Card crafting is also fairly similar to Hearthstone. While browsing your card collection, you’ll be able to mill certain cards and get Scraps. You can then use those scraps to craft other, more desirable cards. You’ll get scraps from time to time as progression rewards, but your main source will be disenchanting unwanted cards.

Here are some tips for those of you that already know the basics of Gwent, what it is and how it works:If you’ve got some advice of your own, feel free to share it in the comments.