Like its predecessor, Horizon Forbidden West is also full of all manner of mechanized animals. Many of these will be aggressive towards you, but, with the right tools and skills, Aloy can “tame” some of them and turn them into mounts. Doing this will not only allow her to gain a fast mode of transportation, but also a guardian that will protect Aloy from other enemies. The Clawstrider is one such mount. Our How to Get Clawstrider Mount in Horizon Forbidden West guide will explain what you need to do in order to be able to ride it. 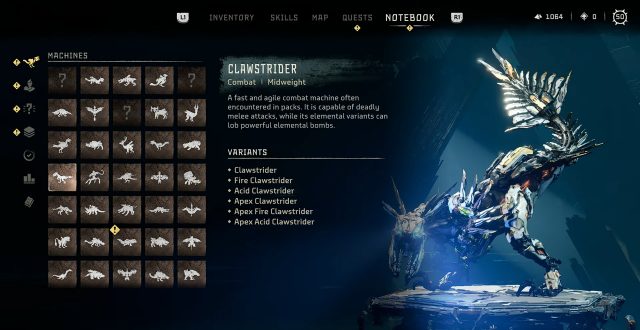 Where Can You Get the Clawstrider Mount in Horizon Forbidden West

Ever since the Clawstrider appeared in a Horizon Forbidden West trailer – with an enemy atop of it – players have been wondering if Aloy will be able to do the same. Well, wonder no more, since the answer is a resounding yes. To quote the game itself, the Clawstrider is: “A fast and agile machine covered in razor-sharp blades. It is often encountered in small packs and is capable of a variety of deadly melee attacks.” There are three variants that you can mount – the regular melee one, the fire one (with fire attacks, of course), and an acid one (naturally, with acid instead).

To get it, first of all – you will need to be at least Level 22 or higher. Next, you need to complete the IOTA Cauldron. This location can be found on the top end of the world map. We’ve marked where this location is. Considering the high level requirement and the fact that the IOTA Cauldron is a long distance away from where you start the game, it will probably take you a lot of time until you have unlocked the Clawstrider there. But, since it is a very fast mount and a more than capable fighter, doing this is definitely worth it.