Horizon Zero Dawn is already a phenomenon, and the game isn’t even out. The trailers we’ve seen so far seem to promise an incredible adventure. The combination of the caveman technology of humans and the hi-tech robot animals, coupled with the remnants of a past civilization, have sparked the interest of many.

However, the one aspect of the game that has garnered the most attention is the protagonist. Aloy, the young and brave hero of the game, has already become instantly recognizable and beloved. Cosplays of her are everywhere, as a testimony of how many hearts she’s already captured. In the new Horizon Zero Dawn – Secrets Of The Past Video we find out more about Aloy’s Story and her world from the game’s developers. 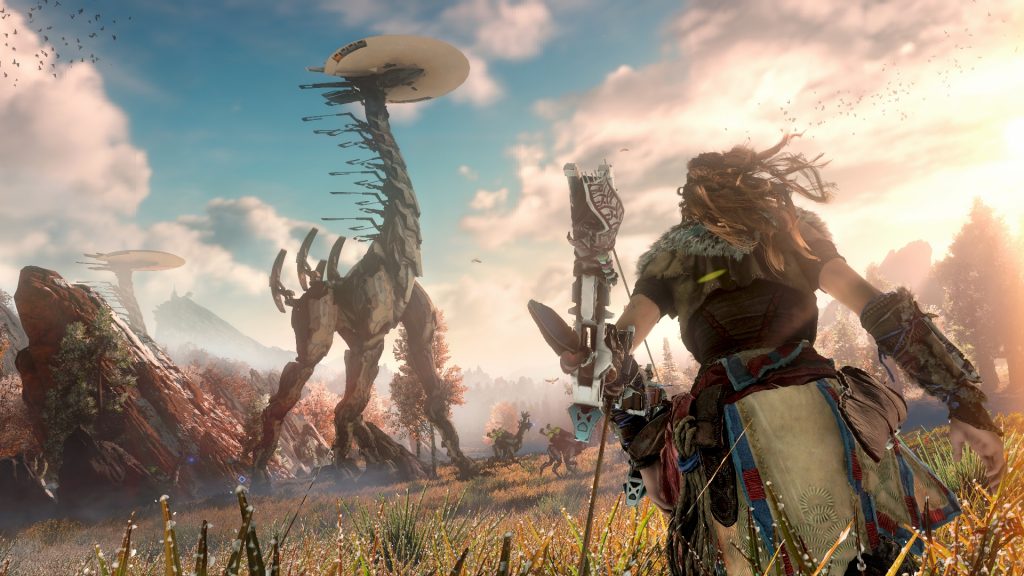 Secrets of The Past Horizon Zero Dawn Video

Horizon Zero Dawn is an upcoming action role-playing game by Guerrilla Games for the PlayStation 4. Many gamers are awaiting it eagerly, since it looks like it’s going to be a ton of fun. Players will be able to explore the vast world of the game through the eyes of Aloy.
Aloy is a young woman who questions her village elders and is therefore shunned by her people. She sets off into the wild, encounters huge robot beasts, and explores the remains of a civilization long-gone. The setting reminds me a lot of The Planet of the Apes, just with robo-dinosaurs instead of apes.

In a new video on the PlayStation EU channel, chief Hermen Hulst, game director Mathijs De Jonge and art director Jan-Bart van Beek talk about the world and how Aloy fits in.

According to the video, Aloy is a misfit who spent all her life in her tiny village. That way, the player and her are together on this journey of discovery. While the world has it’s own history that you can uncover, this is primarily the story of Aloy. She is the typical protagonist on the hero’s journey. It’s a tale as old as time, and that’s why we love it. The video teases with just enough info to keep us even more engaged and leaving us wanting more.

Horizon Zero Dawn comes out on February 28, 2017 for the PlayStation 4

Looking forward to Horizon Zero Dawn? Tell us your feelings in the comments!