Following the success of games like Killzone 2 and Killzone 3, Dutch developer Guerrilla Games released Killzone Shadow Fall, which ended up being an inferior game compared to its predecessors and while it was a relatively solid shooter, it did not quite live up to the hype. And it certainly did not turn into the glorious PS4-exclusive FPS everyone was hoping for and Sony was left without a flagship FPS game for its console. Guerrilla clearly wasn’t wasting any time and neither was Sony. They had something new lined up. After six long years of hard work, Guerrilla finally brought a completely new IP to the PS4. Not only have they delivered a top-notch open world RPG, but the story and central character of Horizon Zero Dawn already boast a massive fan-base. Basically, thanks to the diligent folks at Guerrilla Games, Sony now has a system seller on its hands. 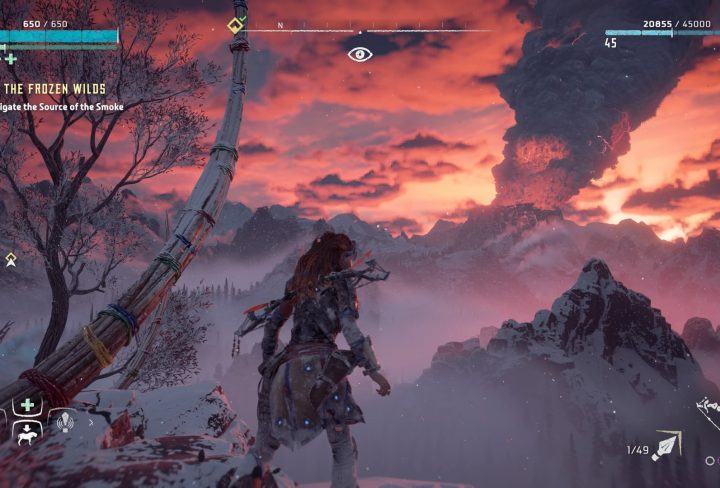 The world of Horizon Zero Dawn is vast and incredibly dangerous. Still, it’s also jaw-droppingly gorgeous. When you’re playing Horizon, it’s quite possible to lose countless hours on exploration. You can help people out, complete side-quests, unlock more missions etc. It will take the average player approximately 45 hours to finish the main storyline and side-quests. Of course, if you’re a completionist, it’ll take well over 60 hours to peruse through all of its precious and delightful secrets and treasures. Now it’s time to go beyond the borders of the original map, as we face new challenges, new dangers and, yes, lovely new environments.

For the past several days we’ve been exploring the wonders of The Frozen Wilds, the very first batch of downloadable content for popular RPG. Keep in mind players are required to own the full game in order to try out The Frozen Wilds. Okay, if you’re thinking you’ll be done with this DLC in a few hours, you should think again. While it certainly may not have the duration of the original game, there are numerous goodies and tasks to keep you occupied for quite some time.

The new chapter in the story sends the main character, Aloy, into a new region called “The Cut,” which is located beyond the northern mountains, where the Banuk tribe is fighting to survive. The Banuk live in a settlement called Song’s Edge and as soon as Aloy arrives she starts to learn more about this tribe and what it has to do in order to endure such harsh conditions. She eventually discovers that the frost and bitter cold are not the only threat. As she sets off into the icy wilderness, Aloy has to uncover details surrounding this tribe, and that leads to an ever bigger mystery. After only a few steps, she encounters beasts she never came across before. The worse thing is, these new creatures are different from those she fought earlier. They are fierce and tougher to bring down; even tougher than the corrupted machines she dealt with in the past. Aloy is not aware precisely what causes these new machines to behave so aggressively, which is why she is determined to get to the bottom of it. 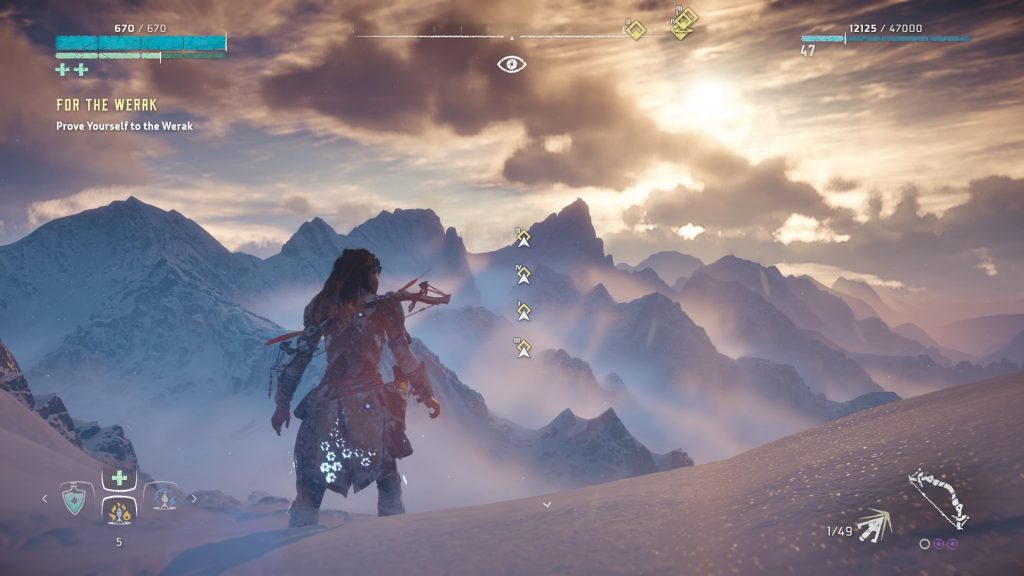 In order to deal with an range of new foes, Aloy can use a new set of skills that can now be unlocked in a skill-tree, called “Traveller,” which was added next to existing trees – Prowler, Brave and Forager. One thing I have to make perfectly clear – regardless of how much you’ve leveled up your character, Aloy is going to have to work a bit harder before she can tackle some of the machines that are lurking within “The Cut.” Sure you can go for it straight away, but it won’t be a walk in the park. First off, she needs more powerful weapons, but most of the weapons on offer cannot be purchased unless you have a special type of blue crystal, which is used in this particular region as one of the main trading resources. Even if Aloy packs a brand new weapon such as the Stormslinger (acts like kind of rifle-like, long-range firearm), taking down waves of new creatures, such as the extremely powerful Daemonic Scorcher, will be very challenging. The Scorcher, for instance, lunges forth with an epic stride and has strong fire-based attacks, but it is also incredibly agile. In short, not only do you have to carry better weapons, but you have to dodge faster, and make every shot with your weapon count, and things get tougher with each encounter.

Now let’s get into the really good stuff. One of the most commendable aspects of The Frozen Wilds is the fact that it continues in the spirit of the main game. The moment you step into the new area, you’ll start to feel the magic of the original. I have to admire Guerrilla Games’ incredible devotion to detail. You’ll have plenty of fresh content to sink your teeth into, next to the main story, of course. Side-quests take you on separate little journeys, and each one is a thrill on its own. There’s no telling what lurks beyond each and every corner, but whatever it is, you can bet your ass it’s worth it. During my time with the DLC, I did not come across a challenge or quest that was repetitive or uninteresting. Kudos to the devs on keeping things exciting and fresh.

Another neat little addition is dealing with Control Towers, which unless taken down, will provide perks and boosts to all nearby machines. It’s a cool new gameplay element that increases the need for a more strategic approach as you fight the new Daemonic machine threat. 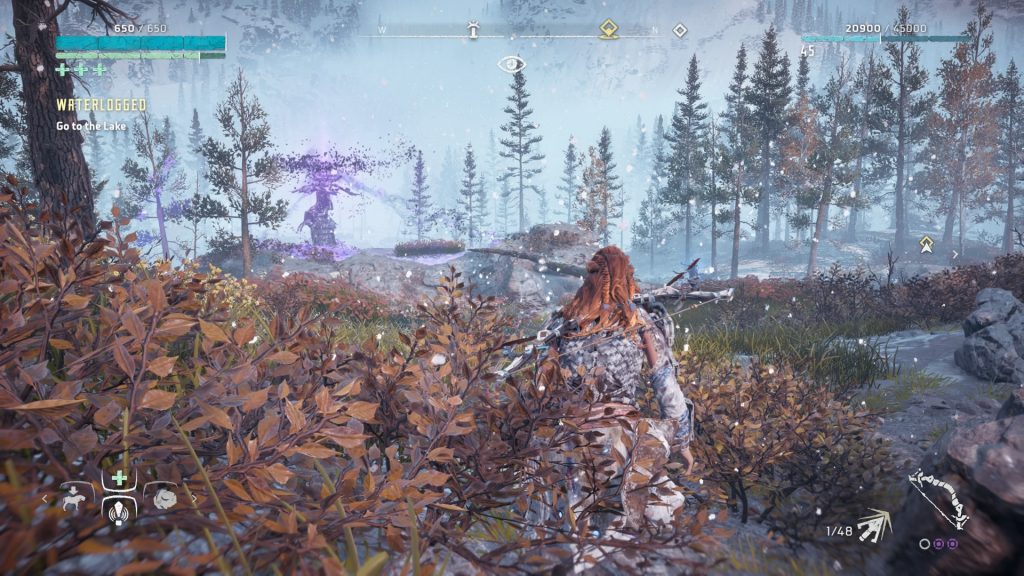 To my slight disappointment, I did run into some nasty bugs that need to be ironed out. When I was exploring one of the new underground areas (a massive water dam) the camera behaved somewhat erratically at times. This happened when certain walls or objects got in the way of the action, as I was panning the camera around. Another issue occurred when I took out a giant Snapmaw. The body of the Snapmaw had jammed and blocked one of the cave entrances. I managed to get around that by reloading my save, but I wasn’t too happy about having to deal with three Daemonic Snapmaws all over again just because of that glitch.

I must stress that these are minor issues and they honestly haven’t spoiled my overall view of what’s clearly a fine addition to such an epic and gorgeous world.

The new skill-tree is kind of basic. Apart from skills like ‘Dismount Strike’ (delivering a devastating blow to machines while jumping from your mount) you won’t find any noteworthy thrills in terms of combat maneuvers. Most of them are quite frankly just practical improvements that help with salvaging parts and collecting resources along the way.

In the end, it must be said that this is a pretty solid DLC pack that expands a rich and beautiful world, taking you on a mysterious new journey and offering a satisfying continuation to Aloy’s exciting tale. If you’re looking to explore every nook and cranny of the new map, you’ll have a lot to enjoy, and we highly recommend you take your time to complete every side-quests and extra challenge. Trust me, they are all worth it.

NEXT POSTCall of Duty: WWII Dominates UK Sales, Public Not That Pleased