Ginger in a Pickle is a quest in Kingdom Come Deliverance. It’s one of the main quests, which means you won’t be able to miss it. It involves an investigation into the habits and misdeeds of a certain group of bandits, operating between Talmberg and Neuhof. You’ll need a silver tongue if you want to avoid bloodshed here, but you can also brute-force your way through. If you’re stuck at any point, we’re going to show you how to complete Kingdom Come Deliverance Ginger in a Pickle quest.

Where to find charcoal miners?

Ginger is a young man who works the stables in Neuhof. He’s gone missing, and it’s up to you to find him. You’ll need to talk to three groups of charcoal miners, which means finding their camps. The first one is by the river south of Neuhof, while the other two are closer to Talmberg.

When you talk to the last miner, you can either promise to take care of the bandits or lie and say you’ve already dealt with them. In either case, he’ll tell you where to find Ginger. If you haven’t already killed the bandits, Ginger will ask you to do so now. You can lie to him as well, or you can put an end to the plundering.

Where to find bandit camp?

If you decide to kill the bandits, you’ll have to find them. Their base is in the woods between the second and third miners’ camp. There’s only two of them, so it should be manageable with a little planning. It’s best to use a bow to take out the first one, then deal with the other one in melee. 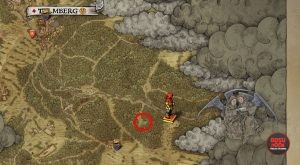 How to unlock Ginger trophy/achievement?

Although you will complete the quest after talking to Bernard about Ginger and the info you got from him, you won’t get the trophy here. You’ll have to wait a day in Neuhof, then look for Ginger by the bonfire across the street from where Bernard is leaning against the wall. Simply talk to him, and the achievement will pop up.