Mysterious Ways is one of the main quests in Kingdom Come Deliverance. It’s about the investigation of a certain bandit’s death, and it’ll see you talking to a local priest. You’ll either try to get him to break the seal of confession, or leave him be and get the info the hard way. One of the choices will grant you the Sinner trophy, while the other will help you unlock the Virgin achievement. There are a couple of tricky conversations in the quest, so we’ve decided to write this guide, to help you finish the Kingdom Come Deliverance Mysterious Ways quest.

The quest will see you head to Uzhitz, a village in the northeastern corner of the map. When you first arrive, you’ll notice a bunch of people congregating around a house. You’ll find out soon enough that they’re there because of the murder of Lubosh, one of the bandits you were tracking. The bailiff is entirely unhelpful, but the others will direct you towards the village priest. He’ll tell you he can’t help (regardless of your approach), but will still invite you to the tavern.

How to gain the priest’s trust?

In order to gain the priest’s trust, you’ll have to be honest. Choose the first answer to every question he asks you about yourself. He will react positively to this, and when you tell him it’s getting late, he’ll ask you to stay and drink with him.

If you choose “I’d say that’s a good plan”, you’ll get drunk with the father and unlock the Sinner achievement, but you’ll also be barred from earning the Virgin trophy. If you pick “I’m not in the mood for drinking”, you’ll miss the former, but will still be able to get the latter. You also won’t get the info from the priest, but more on that later.

How to complete sermon?

Choosing to drink with the priest will lead to a night of drunken debauchery – ale, gambling, fighting the law and, of course, wenches. In the morning, father Godwin will ask you to deliver the sermon instead of him. If you do well, he’ll tell you all about Lubosh and his gang. Here are the options we chose when we got to the pulpit, in order:

Where to find embrocation?

If you refuse to drink with father Godwin, he won’t give you the info you need. Instead, you’ll need to talk to the bailiff again. He usually patrols the town, which means he’s hard to find. If you’ve got some cash to spare, you can commit a minor crim to draw him out, pay the fine then talk to him. He’ll send you to see a scribe in Rattay. 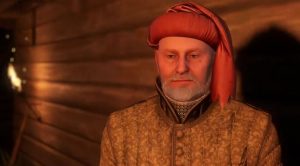 The scribe has joint pain, and wants you to get him some medicine. He’ll trade the information he has for an embrocation. The most straightforward way would be to buy it from the apothecary – the store is in the same building, directly below his office. You could steal it, too. Or, if you’re good at lockpicking and reading, you could pick the lock in the scribe’s office and read his ledger yourself.