In the newest game play trailer, Arthur Parsons from TT Games talks about the state of the game, and what players can expect. Take a glimpse into the boss fight between the Guardians of the Galaxy and one of the Celestials. There are more than two stages, each with a different and unique approach.

The fight against the Celestial (Eson the Searcher, by the looks of it) in the trailer feels grandiose. The challenges presented to the player in order to overcome it successfully feel a bit overwhelming at some points, with all the chaos happening on the screen.

Since Kang the Conqueror is the main villain of the game, disrupting the time continuum, we can expect to see all kinds of new heroes that will come from different universes and time periods. Some of the heroes you can expect to play as include Wild West Captain America, Spider-Man 2099, Loki, Doctor Octopus, Spider-Gwen, The Hulk, and many more.

The difference in gameplay between this and the previous title, according to Arthur Parsons, is that they had to do everything better. They had to have a bigger open world, a more expansive story line, a less linear approach, better character builds, improved combat, better AI, and new mechanics, including time travel and teleportation.

In the video, we can learn something more about the multiplayer. Besides the existent drop-in, drop-out co-op mode, there is a new mode called Grand Master Mode. It consists of 4-player arenas with different objectives. You can bring any character you want into the fights. 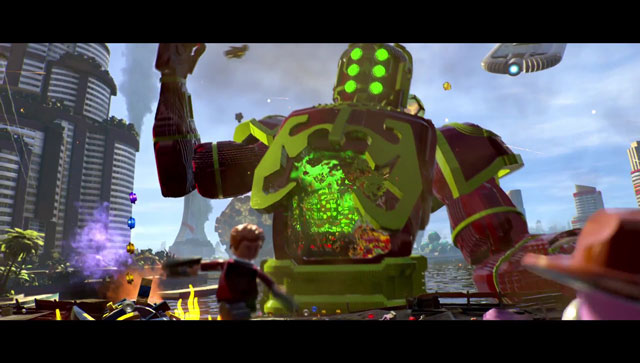 The new collectible trading cards tell you everything there is to know about the heroes they represent. You can click on a card and find out more about the specific hero: what their powers are, when they first appeared, and more. If you’ve played the previous game, you can expect that the new “old” characters have loads of new moves. For example, Captain America can now power-charge through enemies while sliding on his shield.

If you’ve missed it, there is also a Lego Marvel Super Heroes 2 launch trailer. Here we can see the Guardians of Galaxy working their way around the new pickle they found themselves in. Baby Groot is at the center of it, presumably because of the new movie.

You’ll be able to play Lego Marvel Super Heroes 2 starting November 14th, on PC, PlayStation 4 and Xbox One. If you own a Nintendo Switch, you’ll have to wait a little longer. The game will launch on the hybrid console during this holiday season.