The very first Lost Ark battle pass, known as Ark Pass, has arrived. The Ark Pass is a new reward system added to the MMO with the April update in 2022. It consists of several tiers with a slew of rewards for players to grab. Depending on how much you want to spend, or if you want to spend money at all, you can unlock various tiers of in-game rewards, including both cosmetics and gameplay items. All in all, there’s something for everyone. Here’s how much Ark Pass premium and super-premium tiers cost. 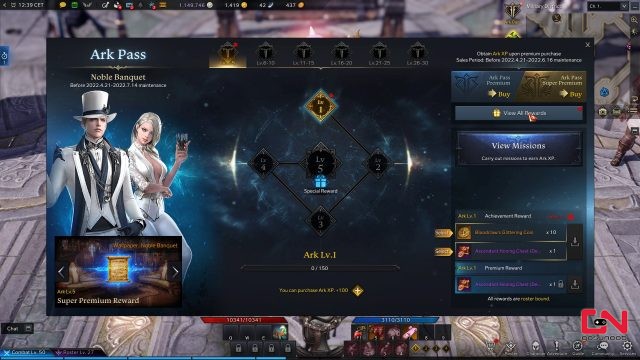 As you probably know, the Ark Pass has three separate tiers. The first one is a free tier, which requires no payment in order to claim rewards. Simply play the game and you will receive these rewards for achievements on each of the Ark Pass’ 30 levels. The second tier is called the Premium Ark Pass. This tier offers additional rewards on each level on top of the free rewards. These rewards include materials, stones, coins, and all kinds of goodies. All in all, if you are planning to put any money into Lost Ark, the Premium tier is definitely worth considering. Finally, there’s the Super Premium tier. Here’s how much each battle pass tier costs:

As we’ve already mentioned, if you are planning on spending money, the Ark Pass Premium is definitely a way to do it. It cost around 15 dollars (or euros if you are in Europe). Though, it should be noted that you will need to buy the 2,200 Royal Crystals bundle as a minimum if you don’t have extra crystals to spend because the only lower tier is 1,000 Royal Crystals for 10 dollars, which is not enough. That’s a bit sketchy, but not a new practice, unfortunately.