New Bordeaux is where Mafia 3 takes place. It is based on 1968’s New Orleans, Louisiana.
▼Article Continues Below▼
It is not a small map by any means. There are 10 districts in New Bordeaux. These districts are controlled by various Criminal Organisations. This is where they run their illegal activities. The main goal of the game itself is to take over the districts from their current owners and control the entire New Bordeaux Map. 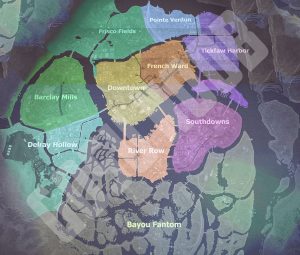 From the southern swampy area, to the concrete jungle of central New Bordeaux, you should see a large difference between some of its districts. It is not only the surroundings – the people located in these districts also behave different and will react to your actions accordingly. Not to mention all kinds of different cars running in certain areas.

A day and night cycle enriches the feeling of being in a living city. As the night lights turn on and the rain starts pouring, you know it is time to slow down and enjoy the scenery.

PREVIOUS POSTMafia 3 – Everything We Know So Far