You never get a second chance to make a first impression. Marvel’s Avengers deserves to be the default entry in the “Great encyclopedia of phraseology” regarding that famous line, often used in marketing aftershave lotions. Indeed, the first impression of Square Enix’s entry in the multi-billion dollar multimedia franchise was a mini disaster – after 20+ MCU (Marvel Cinematic Universe) movies, with beloved characters etched into the global mainstream consciousness, someone thought that would be a good idea to announce a triple-A game about the Avengers without securing the actors’ likenesses. 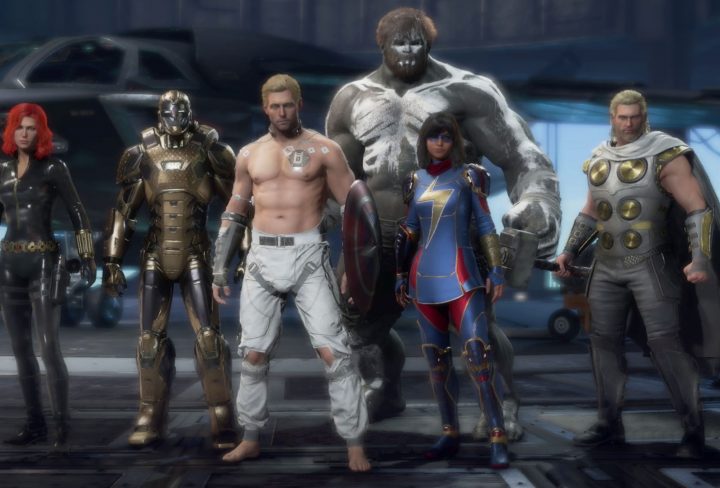 With a fully bearded Tony Stark, Dr. Bruce Banner more akin to James Spader than Mark Ruffalo, and others looking markedly different from their movie counterparts, the entire cast looked like a bunch of cosplay pageant finalists dressed in expensive-looking costumes but with totally wrong faces. Appeasing the MCU fandom, the primary target audience for the game, was not going to be an easy task, but that too failed during the beta period in August. Square Enix opted to show a very limited portion of content, prompting some critics to compare the game with the extremely ill-fated Anthem by EA and BioWare.

With all that in mind, it’s no small wonder that the final version of the game undoes almost all reasons for worry. Marvel’s Avengers is much better than we (or many people, for sure) expected, and that is mostly due to its superb single player campaign. If we were to further narrow it down, most credit should go to its main protagonist, young Kamala Khan aka Ms. Marvel, the newest member of the Avengers. She has never before been seen in movies or TV, but remains rather popular in comics since her debut in 2013. 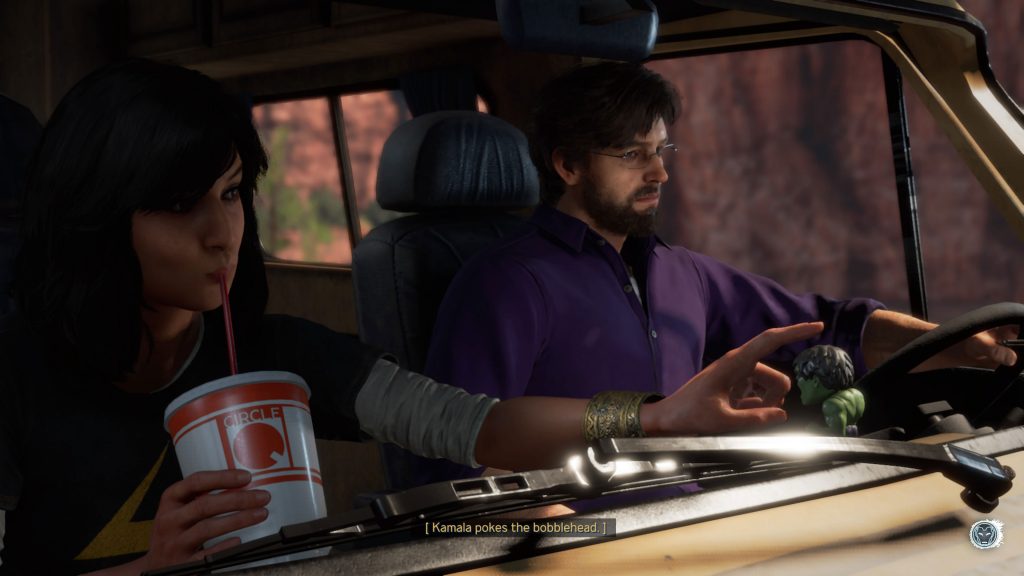 From fangirl to superhero

Kamala Khan is a Pakistani-American teenager from New Jersey and the biggest Avengers fan in the history of the universe. During the festivities of A-Day, a sort of “mix with the people” PR event in which the heroes mingle with the crowd and take selfies with children, she got to meet her heroes, but the perfect day came crashing down along with the Chimera Helicarrier which hosted the celebration. Unknown assailants staged an attack and managed to sabotage the carrier’s experimental reactor, which resulted in a localized catastrophe. San Francisco suffered several thousand direct casualties plus and unknown number of people subjected to Terrigen mist, a powerful mutagen that creates Inhumans (basically, X-Men remastered). 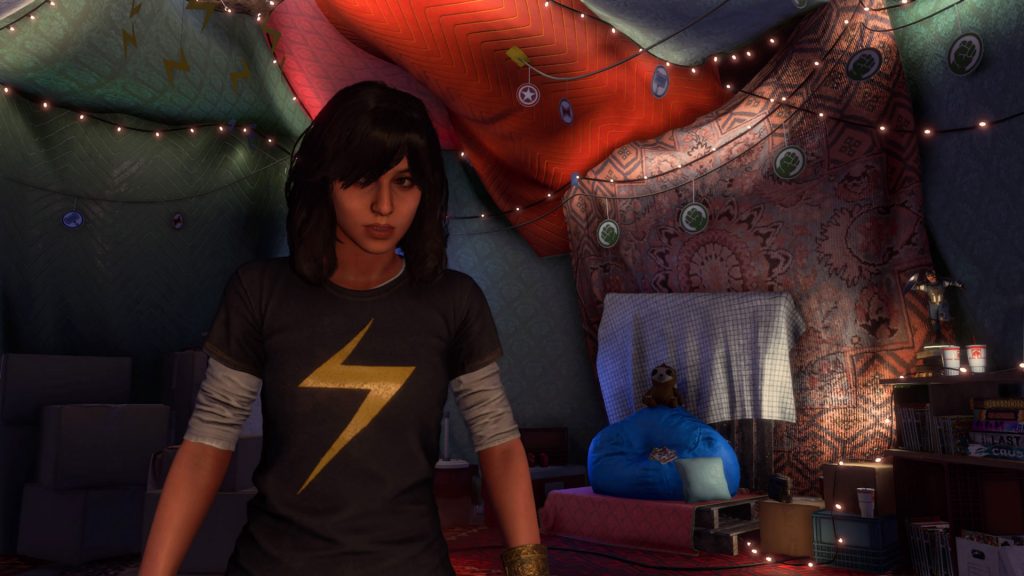 Fast forward five years and we see Kamala as a young adult living in dystopian San Fran, governed by AIM (Advanced Idea Mechanics), a domestic technocratic / Blackwater type organization tasked with policing the city and apprehending Inhumans. Being Inhuman herself, she needs to hide in order to survive – the good old Avengers disbanded after the catastrophe, with captain Rogers presumed dead after an unsuccessful attempt to stabilize the reactor and the rest of the gang scattered to the wind. It will be up to Kamala to track them down and attempt the seemingly impossible reunification. 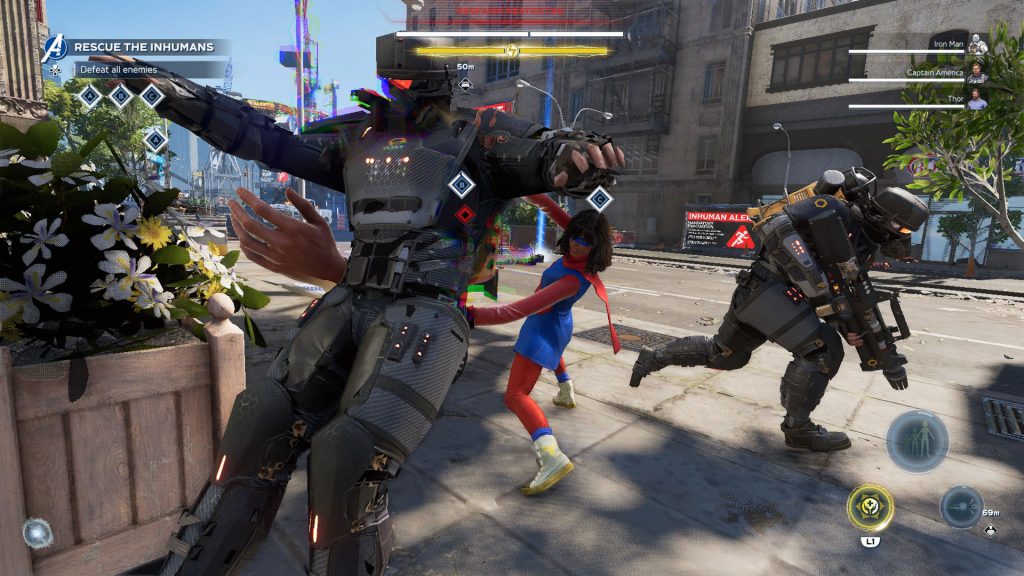 Marvel’s Avengers is a looter-shooter game, created in the same vein as Destiny and Destiny 2. It consists of two main parts – the single player campaign and the Avengers Initiative; the latter being a co-op multiplayer live service component that houses endgame content destined to expand and evolve over time. You begin the campaign as Kamala, our naïve but very enthusiastic superhero wannabee. It starts off linear, but when you finally recruit Dr. Banner and Tony Stark, the game expands in several directions. You get the base of operations and are introduced to two factions, SHIELD and Inhumans. You start to build a reputation with them by playing optional missions that allow for a brief detour from the “cinematic” main narrative. Also, you get holographic training missions for every new Avenger you recruit, and each one comes with several unique micro-campaigns. After 4-5 hours, you might start to feel a bit overwhelmed by options. One of those is loot. Boy, there is a LOT of loot in this game. Every character has his or her own inventory, with a shared pool of resources for upgrading the loot you decide to keep and use. During the course of the campaign, you will constantly replace gear as you level up, switching characters in the next mission and doing the min-maxing over again. It slows down a bit near the end, but like in Destiny, the process becomes the underlying reason for post-campaign play. 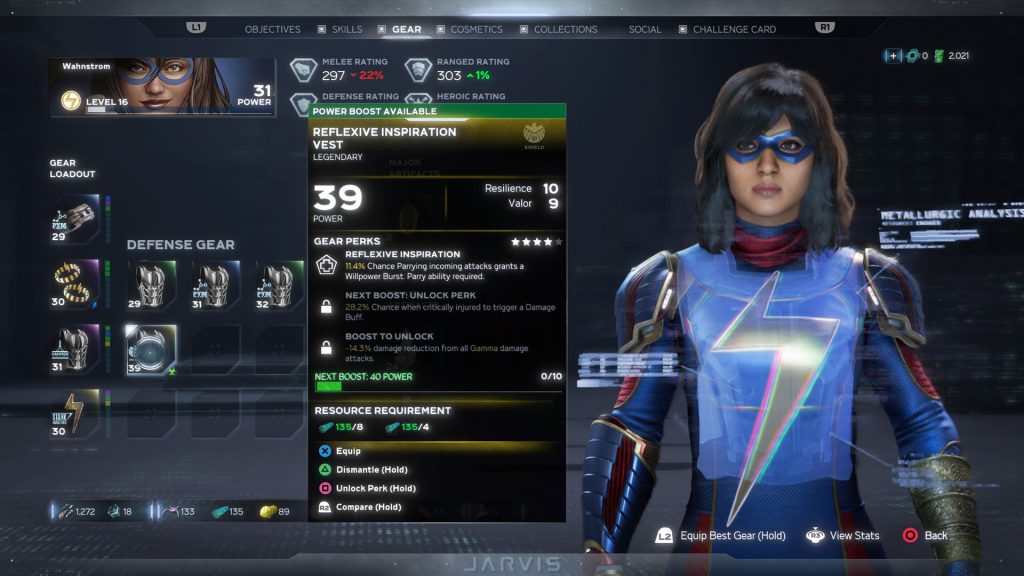 Marvel’s Avengers greatest accomplishment is the sheer quality of translating combat styles from the movies into gameplay. Thor, Hulk, Iron Man, Black Widow and the rest each have a unique set of moves based on a simple, unified concept of energy and cooldowns that drives the availability of special strikes. Some, like Iron Man and Thor, can fly, Kamala is able to self-heal, Black Widow can turn invisible, Hulk smashes like there is no tomorrow, etc. Its all pretty simple, but very flashy, attractive and efficient. Simply put, the game is an Avengers fan’s wet dream.

After the campaign, you are advised to take the next step and select Avengers Initiative, the co-op multiplayer that consists of a number of generic missions designed for endless grind. Even if you level up your characters to the max and obtain the best possible loot, which will take weeks of persistent playing, there remains a mega-ton of costumes and other cosmetics to unlock. Some of that optional stuff is available for purchase via microtransactions, but most of it can be obtained through sheer patience and grind. For now, the game lacks advanced content that require serious coordination, like raids, so the appeal of the endgame is rather limited. 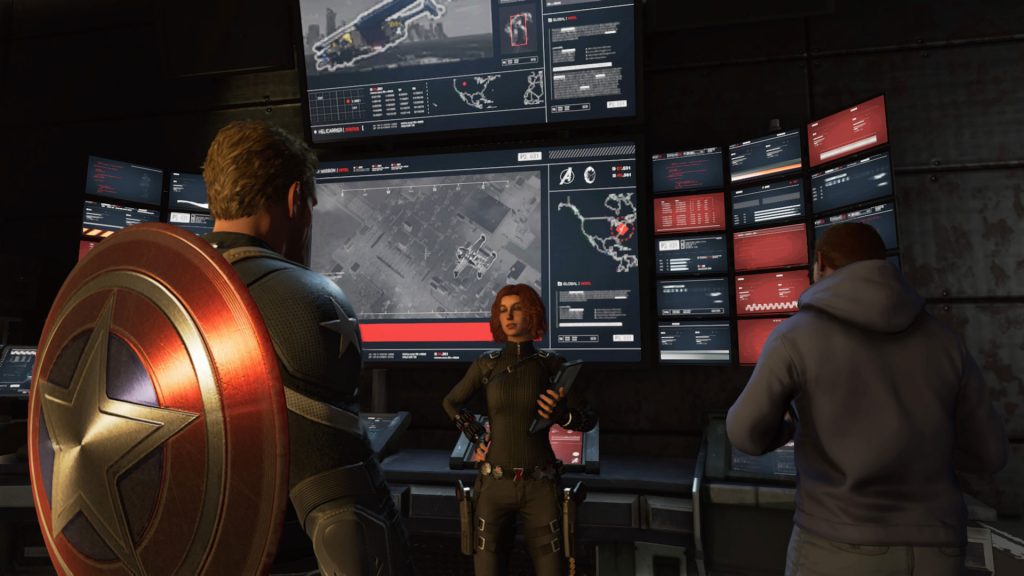 Quality-wise, Marvel’s Avengers is like an inverse Destiny 2, with a great single player campaign and lackluster end-game multiplayer content (so far). The post-campaign needs to improve for the mid- and long-term success of the game, and we hope that Square Enix has something interesting in the pipeline. Raids, PVP, basically any other mode than old co-op PVE would be welcome. If they manage to keep the game fresh, updated and devoid of aggressive insistence on micropayments, Marvel’s Avengers can make a solid impact in 2020 and beyond.