Sidney Levine is one of the vendors in Marvel’s Avengers. He can be found at the hangar, and he’s the one in charge of faction rewards. You’ll visit him a lot later on, but before you do, you’ll have to reach him first. A number of players have been unable to find him – the game tells them they’ve unlocked new faction rewards and marks Levine on the map, but they can’t get to him. This guide will help you visit Sidney Levine in Marvel’s Avengers, and show you how to unlock the airlock door.

How to reach Sidney Levine?

As far as we can tell, the only way to reach Sidney Levine is to wait. The airlock door leading into the hangar is unlocked at a certain point in the story, and there’s no way to get through it before the time is right. So you just have to keep playing until the main story sends you there, then hop on over to Sidney for all your accumulated rewards. 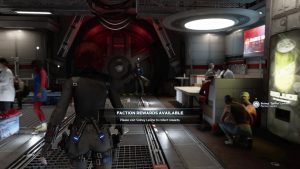 The door is going to open during the Interrogation Anxiety mission. You’ll have to talk to Tony Stark, Hank Pym and Bruce Banner about stuff we won’t mention because of spoilers. At this point, you’ll also unlock Black Widow as a permanent addition to your roster. After your conversation with Bruce, he’ll head on into the hangar for a special assignment. If you head there yourself – to the big round door in the room where all the vendors are – you’ll finally be allowed through. Just follow the marker with Sidney Levine’s name and you’ll find the faction vendor soon enough.

It’s unfortunate because you’ll have to bear the constant reminder that there are faction rewards to be claimed until you reach the point when you can get them, but there’s nothing to be done about it.