Kinsects are accompanying weapon to Insect Glaive and in Monster Hunter Rise their upgrades are a bit different than what people are used to. They provide buffs, based on what monster part you extract and also have their own attacks. They were very useful in previous games for getting on top of monsters, but with wirebugs and wyvern riding they are somewhat less important. Still, Insect Glaive together with Kinsects is still a very versatile weapon that both new and veteran players will enjoy. We’ll explain how to upgrade Kinsect in Monster Hunter Rise and give some details on the various weapon uses. 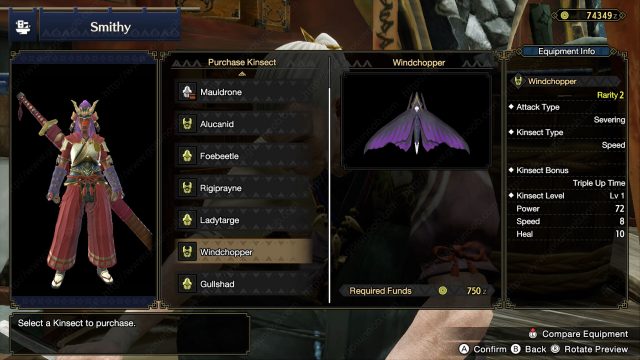 How to Upgrade Kinsect in Monster Hunter Rise?

There used to be an upgrade Kinsect menu in previous games at the Smithy, but in Monster Hunter Rise you get better level Kinsects when you upgrade your Insect Glaive at first. Once the rarity level opens up at the Smithy you can buy new, higher level, Kinsects. Initially you can buy just two – the Culldrone or the Mauldrone. Go to the Smithy and choose Forge/Upgrade Weapon and then select the Insect Glaive. Looking through the weapon trees some will have Kinsect Level of two and above. Progressing through the story and killing new monsters opens up new rarity levels at the smithy. Taht is when you’ll be able to purchase more powerful Kinsects. To summarize, early in the game you’ll get higher level Kinsects through upgrading your Insect Glaive and later you’ll be able to purchase new and upgraded ones from the Smithy.

Kinsects have been streamlined in Monster Hunter Rise and do not require special care like in some previous games. They get upgraded and purchased like any other piece of equipment. They level up based on the type of Insect Glaive you have. Although starting Kinsects are very slow later unlocks and upgrades make this favorite game mechanic very viable.

Insect Glaive move-set includes using your Kinsect to extract buffs from monsters. You harvest extracts by using ZR + X on the monster. You can get red, white, green or orange colored extracts. Red comes from the head. Orange is extracted from the body. Green comes from tails in general, while white is extracted from monster extremities (legs/wings). Here’s a list of all the color combinations and the buffs they provide.