Fishing spots are a type of resource node in Monster Hunter World. Pretty much every body of water constitutes a fishing spot in MHW, and the new area, Hoarfrost Reach, is no different. Iceborne’s frosty region is home to a mere two fishing spots, which house species both new and old. In case you run into trouble while looking for them, we’ve written this guide to show you both Monster Hunter World Iceborne fishing spot locations.

Where to find fishing spots in Hoarfrost Reach?

On one hand, it makes sense there aren’t many fishing spots in the new area. After all, it is covered in permafrost. On the other, they’ve missed a chance to allow us to go ice fishing here, which could’ve been fun. The two fishing spots that are present can be found underground, in the icy caves beneath the main level. 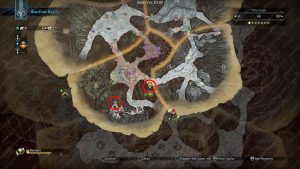 Both spots are on level 2, in zone 8. The first one is in the southwestern corner, at the end of the tunnel. The second is in the eastern corridor, the one leading into zone 9. It’s practically next to the border. The only fish we managed to catch without proper bait here was a Gastronome Tuna, but we could see other endemic life species swimming across the underground ponds. Fishing is still a nice distraction from the harsh realities of a hunter’s life, but don’t expect it to be as rewarding as it was in the base game. There are less quests tied to fishing, less variety and less excitement all around.

Fishing enthusiats (both in the game and in real life) would probably frown at this statement and start explaining how I’m missing the whole point of fishing, but to me it’s work. If the fruits of my labor aren’t satisfactory, then I’m going to look for other work.