2K Games have announced that NBA 2K will be getting an update called Park After Dark, which will feature music shows and other festivities in MyPark mode. It’s not going to interfere with regular MyPark games, instead enriching the courts with appearances of famous musicians and special competitions. Read on to find out what they’ve got in store for you. 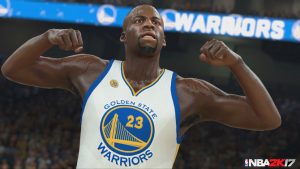 It sounds like a great way to lighten the atmosphere at the courts. Players who decide to attend will be able to play the usual MyPark stuff, this time backed up by performances from hip-hop icons like Snoop Dogg, DJ Premiere and Future.

Here’s what Snoop Dogg, aka DJ SNOOPADELIC, aka Snoop Lion, had to say about the upcoming update:

As the world’s greatest NBA 2K17 player, it’s only right that I get to Snoopify the Park After Dark. I’m going to set off the park with a SNOOPADELIC set that’s going to have house parties around the globe JUMPING OFF.

Those are some bold words. The update will feature some new challenges, like the Park After Dark three-point shoot-out and the Dunk Show-off. 2K are aiming to make this “the most lit NBA 2K experience ever”. We’re not really sure what that means, but it does make us feel slightly embarrassed for the person who wrote it. The whole deal sounds nice, though. Listen to some great music, watch a show, play a game. It’s like having a concert inside the game, lifting your spirits while you play. It’s unclear whether these will be a one time thing, or if they’ll be available as a MyPark option forever.

The Park After Dark update is going to launch on November 26th in the US, while the rest of the world will get it a day later, on November 27th. The performances will be free to attend for all three platforms.