Looking for the full list of songs and artists from the NBA 2K23 soundtrack? The latest iteration of the most popular basketball video game is here! And, as always, it comes with a banger lineup of songs. A good soundtrack in a video game sets the mood and generates an even better experience. Simply put, its importance is never to be underestimated. Whether you are simply interested to see the complete list of songs, or you’ve heard that one song while playing NBA 2K23 and you want to find it, we’ve got you covered! Read on to find the complete NBA 2K23 soundtrack. 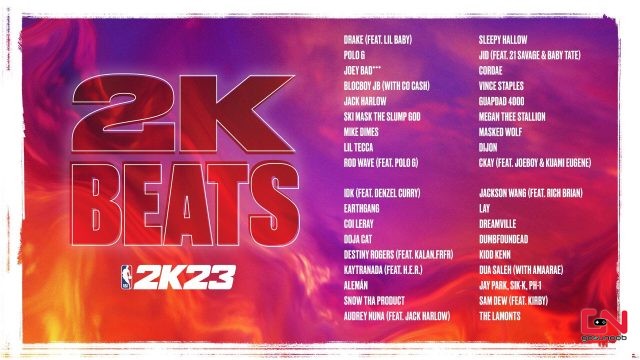 Full List of Tracks and Artist from NBA 2K23 Soundtrack

The NBA 2K23 launch lineup of songs features a host of renowned artists from various genres for everyone’s taste. At launch, the soundtrack features 36 tracks Including famous artists like Drake, 21 Savage, Doja Cat, Guapdad 4000, and many others. Of course, as is tradition with NBA 2K games, this list is not final. Rather, it will be regularly updated with new songs and artists.

Thus, if you are maybe disappointed that your favourite artist is not on the NBA 2K23 soundtrack, there’s still a chance they might be featured in some of the future updates. In fact, the developers have already confirmed that new songs will be added every Friday. That said, here’s the full NBA 2K23 tracklist. Furthermore, if you want to listen to the soundtrack right now, you can check out the official NBA 2K23 Spotify playlist.

NEXT POSTHow to Get Dunk Meter in NBA 2K23