Crafting is a huge part of New World, which is why you will want to upgrade your Forge & Workshop to Tier 3 as soon as possible. This is because doing this enables you to craft higher quality weapons, armor, ammo, and tools. However, this isn’t easy to do, since New World has a very involved system for upgrading workstations in settlements. So, in this New World Forge & Workshop T3 – How to Upgrade Forge & Workshop to Tier 3 guide, we will be taking a look at how upgrading crafting stations, specifically the forge and workshop, functions in New World, and how you can get both of these to Tier 3 quickly and efficiently. 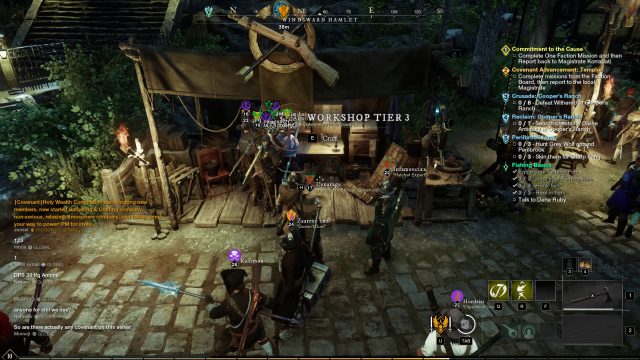 New World Forge T3 – How to Upgrade Forge to Tier 3

Crafting stations such as the Forge can be found in settlements. The forge is used for weaponsmithing. When you upgrade a Forge to Tier 3, you will be able to craft steel weapons, armor, and tools on it. To upgrade a forge to T3, you and the other players on the server will need to complete quests from the Town Projects board for that settlement. Though, this is only done if the guild or company that controls the settlement decides to upgrade this specific crafting station. Which means that this is a very difficult thing to predict, since it is not in your direct control. If it is a new server, or a server with a low population, it can take a while until this happens.

There is a workaround of sorts to this. Instead of waiting for a Forge to get upgraded to T3 in your own settlement, you can go and visit other settlements to see if their forges have advanced to T3. Even better, the settlements in areas to the north will always have Forges which are Tier 3. The drawback to this is that these areas are higher level and thus more dangerous. But, if you are powerful enough, you can make your way to Great Cleave, Edengrove, Mourningdale, and Shattered Mountain and make use of the T3 Forges there.

New World Workshop T3 – How to Upgrade Workshop to Tier 3

Like the Forge, the Workshop is also located in settlements. You will use the Workshop to craft ranged weapons, ammo, and house furnishings. Like every crafting station in New World, to be able to upgrade your Workshop to a higher level (and craft better gear and items), you will need to complete Town Projects board for the settlement in question. Since the guild or company that controls the settlement will choose which upgrades they are going to prioritize over others, this can take a long time. Also, it isn’t just you that needs to be doing Town Projects, but other players as well. To make matters even more complicated, if you are on a sparsely populated or new server, this can take even longer.

You don’t have to rely on this if you don’t want to. What you can do instead is to visit other settlements to see if the players there have managed to upgrade their Workshops to T3. In case they haven’t either, you can go to one of the northern areas. These include Great Cleave, Edengrove, Mourningdale, and Shattered Mountain. The Workshops in settlements there are always Tier 3. But these areas are also considerably more dangerous and higher level, so make sure you are prepared to survive there before making your way north.

NEXT POSTNew World Fish Oil – How to Get