Being an open-world game, Ghostwire Tokyo is dotted with all kinds of side missions and other optional activities. One such side mission will require as to capture Ittan-Momen. Ittan-Momen is a strange apparition that resembles a white cloth. We’ll meet a spirit claiming that Ittan-Momen has tried to strangle it, and will ask as to capture it. And while this seems rather straightforward, some players are having trouble finding and capturing Ittan-Momen. In this guide, we will explain to you where to find Ittan-Momen and how to capture it. 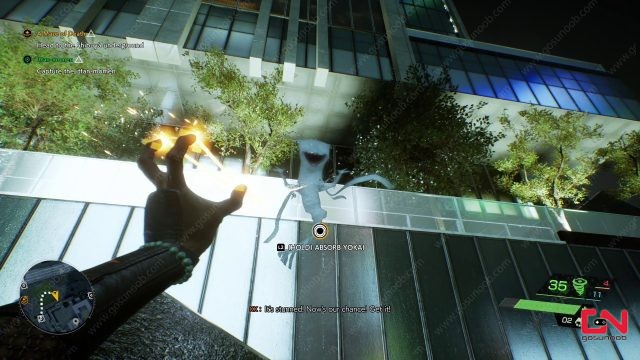 The Ittan-Momen side mission in Ghostwire Tokyo starts when you encounter a ghost of the “Woman Attacked by Cloth” near Kuo Shrine. When you interact with the ghost, she’ll explain to you how she was almost strangled by the said cloth, despite being a ghost. Upon explaining to her that she can not be suffocated, as she no longer breaths, she’ll ask you to deal with it. As it turns out, this scary white cloth is actually Ittan-Momen. Finishing the conversation will trigger the start of the Ittan-Momen side mission.

How to Capture Ittan-momen in Ghostwire Tokyo

In order to capture Ittan-moment, head to a building next to the one with the quest-giver ghost. Check out the images above to see the exact building. Once there, go around the building until you reach the quest marker. You’ll need to defeat a few spirits along the way. Soon enough, you’ll spot Ittan-Momen flying around in a seemingly unreachable position. What you will need to do is to use a green parasol (see the image below), and to climb the edge of a building via it. From there, head to the platform with a glass fence to the left. And then, use the small structure in the middle to jump on the glass cover and get close to the Ittan-Momen.

This will prompt the second part of the quest. Now, all that has left for you is to chase it and capture it. This will be a short chase, just make sure not to lose it. After a while, the ghost will stop. At that moment, hold L2 to absorb it, and you’ve completed the mission.