Major video game release and announcement blunders have happened a lot in 2018 (just remember Fallout 76 and Diablo immortal for a second) and to top them all off we have Grapeshot Games, sister company of Studio Wildcard, that have once again delayed the early access launch for their pirate MMO Atlas. It is getting really hard to explain just how bad things have gotten with the announced launch, but let me give it a try. Atlas is a pirate MMO made by some of the Ark: Survival Evolved developers. It was announced as a game that will hold 40000 people at the same time on the same server with a huge map to sail on and hundreds of islands to explore and colonize. 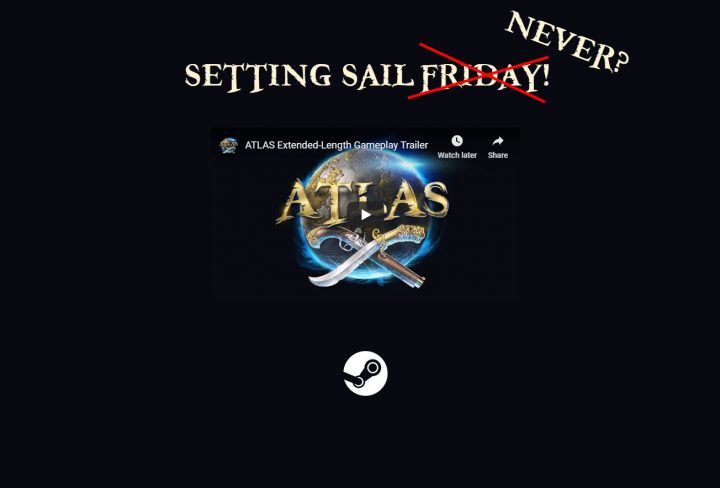 Grapeshot games announced that they will launch the game into Steam Early Access on December 13th. That date came and went without the game being launched and a new date was set – December 19th. There was a countdown on the official website to this date and it reached zero and … nothing happened. There was no game on Steam and we got another announcement that the game’s launch is pushed back another 2 days. It was supposed to be a staggered release. Content creators and Twitch streamers were supposed to be getting the game a day early and start playing on December 20th, while Steam Early Access launch for everyone else was supposed to happen on Friday, December 21st. None of those things happened.

Early launch for streamers was pushed to December 21st and then that was delayed further until 9PM PST when we were supposed to see the game finally in action. Major streamers got their keys and installed the whopping 100GB game client just to realize that no servers are live and that they can only browse through the game’s menus. Quarter of a million gamers tuned into Twitch as Lirik and other popular streamers patiently awaited for Grapeshot Games (aka Studio Wildcard) to make the game go live, but to no avail. Next, it was announced on official Atlas Twitter, with several hour delay, that they are still working on the build and that it should go up in the next 5 hours. It has been six hours since then and, at the time of this article being written, we have no further official news.

It is December 22nd now and Atlas still hasn’t launched for streamers and content creators. Regular gamers, that want to try it in Early Access on Steam, don’t even have a clue when they can expect it to go live for them either. This is almost an unprecedented situation we find ourselves in. Video game consumers are weary of all the lying and skewed information developers and publishers are feeding them about their products. To not be able to even properly estimate how long will it take you create and publish a playable build of your game is on a completely new level of “things I did not think I’ll witness”. What makes this thing so absurd is the fact that all of this could have been so easily avoided by delaying the game for a month or so. This would ensure you have a usable product and none would hold it against you for having one or two delays. Having four delays in two weeks and straight out missing every timeline you’ve set for yourself should raise all the red flags for every potential customer.

It also seems that this is not unheard of behavior for the people behind Atlas. They are the same people that worked on Ark: Survival Evolved (under another studio name – Studio Wildcard) and there have been many reports over the years that the same behavior was observed during the launch of that game. Apparently, Studio Wildcard delayed launches of their DLCs and patches numerous times in a short time span and, once launched, made many hotfixes just to be able to bring their game into a playable state. We have Grapeshot Games now, but a new name does not seem to have changed their bad business practices. We would recommend for all the gamers to be very careful with Atlas. Although it promises a lot of things many gamers could find appealing, it seems that, to this company, promises are just words they can throw around as they please. Wait for reviewers and others to try the game and give you at least some clue whether things are at all in a working order. We, surely, can’t rely on the word of this developer that their game is good to go.

NEXT POSTFallout 76 Players Getting Fallout Classic Collection in Early January