Looking for the Diablo 3 Season 28 release date? Want to know when will Diablo 3 Season 27 end? The next season of one of the most popular action RPGs of all time is almost upon us. Season 27 is well underway as players dive into everything Light’s Calling offers. This guide explores the possible Diablo 3 S28 start date and when we can expect Diablo III Season 28 Patch 2.7.5 PTR to launch. 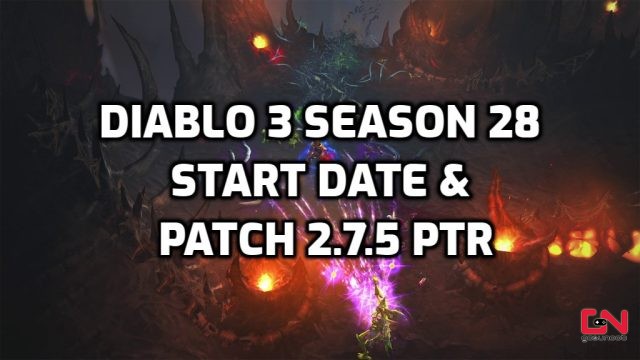 When will Diablo 3 Season 28 PTR Launch?

UPDATE: As of January 9th, Blizzard hasn’t yet announced news regarding Diablo 3 Patch 2.7.5 PTR and Season 28. We will follow the situation closely and update the article with any new information.

It has been more than three months since the release of Diablo 3 S27, called Light’s Calling. Thus, the player base is slowly wondering when we can expect Diablo 3 S28 to start. Over the last couple of years, Diablo 3’s seasons usually last between 15 and 18 weeks. Based on that, we can safely assume that Season 27 will last at least 4 months and enter January 2023. That’s almost a given, considering the start of this year’s holiday season in the second half of December. Based on all factors, our estimated guess is that Diablo 3 Season 27 will most likely end on Monday, January 9th 2023.

When does Diablo 3 Season 28 Start

Now that we have a possible D3 S27 end date, it’s safe to predict when will Diablo 3 Season 28 launch. Based on our projections, Diablo 3 S28 will most likely kick off on Friday, January 13, 2022. It is essential to note that every Diablo season always starts on Fridays. Thus, Diablo III S28 is starting on a Friday as well. It is just a question of the date. We think that January 13th is the earliest possible date, but the new season could also start later that month or even in early February. We will make sure to update the article once we have official information.

Finally, many of you are probably wondering, “when will Blizzard release the Patch 2.7.5 PTR server”? Diablo 3 Patch 2.7.5 will be the next major update for the action RPG, which will release alongside the new season. As is always the case, before the patch goes live, there will be the Patch 2.7.5 PTR period to test new changes and other content. So, when is Diablo 3 Patch 2.7.5 PTR coming out? This hasn’t been officially announced as well, but we are almost 100% sure that the new PTR will be released before Christmas (December 25h, 2022) so that the community will have enough time to test everything during the holidays. As always, we will endeavour to update the article as soon as there are more official details.