The latest FFXIV Patch 6.1 introduces Housing Lottery System where players can win houses, but unexpectedly, after the result announcement period for the housing lottery sales, there were no winners. The following messages appeared – The winning number is 0, or there were no participants in this lottery. So, let’s see what what we found out about FFXIV Housing Lottery bug? 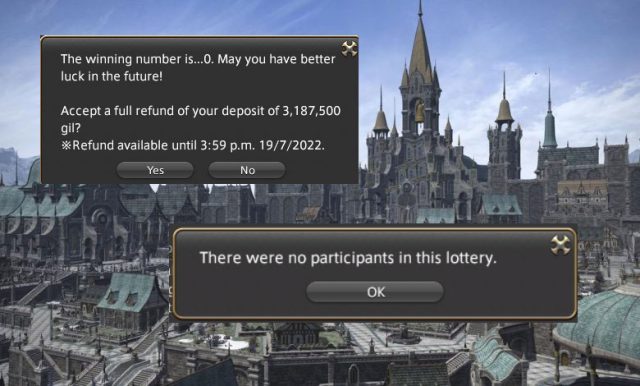 During the last few hours there are many posts on the FFXIV reddit, that indicate problems with Housing Lottery. Developers stated that the issues affect all housing plots in the game, not just the newly released Ishgard district. Some houses are showing the winning bid to be number 0, which is impossible result. On the other hand, other plots are showing a message that there were no participants in the lottery. Unfortunately, no one win many plots and we really hope that plots without winners will be rerolled, and players will get their lands. At the time of writing this article developers didn’t provide any fix to FFXIV Housing Lottery Bug, but they pointed out two important facts:

While you are here, check out some of our other FFXIV 6.1 guides, like how to get Resplendent Feathers in FFXIV Patch 6.1, or How to Get & Where to Turn In Trophy Crystal.