New tracks will be released for Fuser in the DLC pack for June. Fuser is a rhythm game developed by Harmonix – the makers of the hit franchise Rock Band. In Fuser, you play the role of a DJ at a large concert venue, playing for a huge crowd of fans. You put on mashups of popular songs and mix them with audio filters and instrument loops. Recently, Fuser has received a new headliner update (you can read all about it on our post about it here), and it is now getting a brand new DLC. This DLC will not only bring new songs, but also a track that will be offered free to all existing Fuser users. 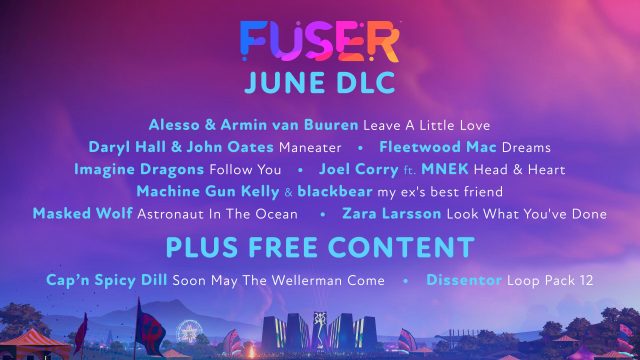 Which Tracks Will Be Released in The Fuser June DLC?

Here is a complete track listing for all the news songs coming to Fuser this June:

Additionally, players will receive the Cap’n Spicy Dill – “Soon May the Wellerman Come” track for free. Another free content pack is the Dissentor “Loop Pack 12.” This pack combines 12 tracks of classic moody Dissentor sounds. This is the second free content pack that Harmonix has put out for Fuser, and more are surely on the way. If you still haven’t had the chance to play Fuser, we invite you to read our Fuser review. We quite enjoyed the game and found it an overall fun experience that can get a bit too hard if you are determined to chase a high score. There is a free demo for the Nintendo Switch, PlayStation 4, Xbox One, and PC (via Steam), so we recommend you try the game out for yourselves.