If you haven’t heard about Fuser, it’s a new game from Harmonix, the studio known for the famous Rock Band series of video games. Instead of equipping players with plastic guitars and other instruments, Harmonix is creating Fuser to become “the next evolution of interactive music games, which puts players in control of the music.” The game “lets players fuse together elements from hit songs across pop, rap/hip-hop, R&B, dance, rock, country, Latin and Caribbean music into all-new mixes.” As you’re probably thinking right now, this kind of game needs quality music, and Fuser will ship with more than 100 massive hits from the get-go. In fact, Harmonix and NCSOFT have just revealed 15 new songs for the game.

Fuser Will Have Hit Songs By Coldplay, DMX, Whitney Houston, Panic! At The Disco, And More 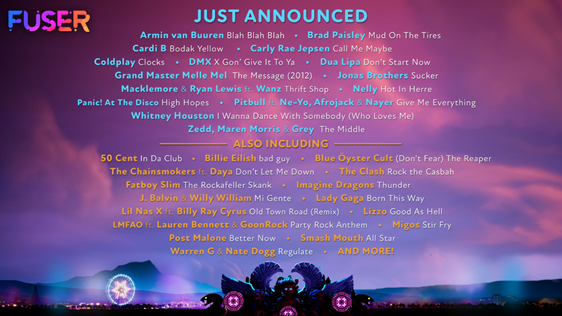 The 15 new songs that have been just revealed for Fuser’s soundtrack include hits from a plethora of artists. You’ve got modern hitmakers such as Cardi B, Dua Lipa, and Jonas Brothers but also old school favorites including DMX, Whitney Houston, and Grand Master Melle Mel. The full list of newly revealed songs can be found below:

The full game, once it comes out, will have more than 100 songs from a wide selection of genres and artists. Fuser is coming this fall for the PlayStation 4, Xbox One, Nintendo Switch, and PC. If you want to see what the game’s all about check out the game’s gameplay trailer below.

NEXT POSTStar Wars: Squadrons Is A Star Wars Game We’ve Waited For Years