During the Summer Game Fest showcase, Marvel aficionados got to see the latest Marvel’s Midnight Suns trailer, featuring a myriad of fan-favourite characters, including Spider-Man, Venom, Blade, Ghost Rider, and many others. Oh, and the new release date! 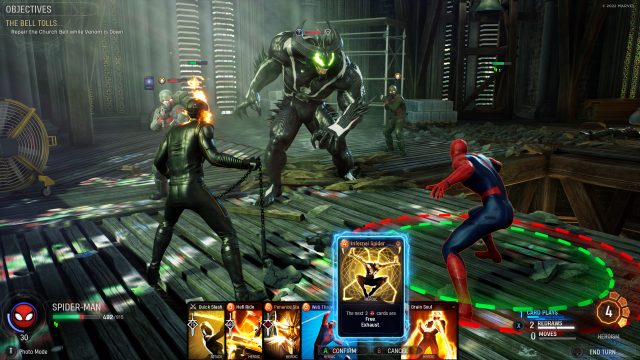 Demons, heavy metal, and violence blended into a deep tactical RPG, that’s how we would describe the latest trailer for Marvel’s Midnight Suns. Developed by a world-renowned studio Firaxis Games, known for their iconic Civilization and XCOM franchises, Marvel’s Midnight Suns aims to explore the darker parts of the Marvel lore, with a focus on demonic forces and occult characters.

Although heavily inspired by XCOM, Firaxis Games reiterates that the game will have its own identity. While not showing the gameplay elements, the Summer Game Fest trailer revealed several new characters. Everyone’s favourite Spider-Man has joined the battle against Lilith, Mother of Demons. In the trailer, he stands side-by-side with other iconic Marvel characters. The trailer also introduced Venom.

Unfortunately for our alien friend, in the trailer, Lilith is corrupting Venom. This corruption twisted him into a half-demon creature known as Fallen Venom. Sabretooth, Scarlet Witch, and the Hulk also have their fallen versions who have unwillingly joined Lilith’s army.

“We’re thrilled to invite players into the darker, supernatural side of Marvel,” said Bill Rosemann, Vice President and Creative Director at Marvel Games. “In Marvel’s Midnight Suns, our friends at Firaxis and 2K has created an incredibly unique and totally authentic Marvel experience that fans can leap into this October!”

Originally planned to be released in March of this year, the game has been postponed. The developers wanted to implement some changes and polish the game based on player feedback. And now, we have a new release date. Marvel’s Midnight Suns will launch on October 7th, 2022. The game will be available on PS5, PS4, Xbox Series X/S, and Xbox One. The Nintendo Switch version of the game will be available at a later date.