NBA 2K22 Season 7: Return of Heroes is just around the corner. With the recently released update for the game, the community has speculated that Season 7 start is imminent. This was soon after confirmed by Visual Concepts. The new season is set to bring a slew of new content to MyCAREER, MyTEAM, and The W Online, with the 76ers star Joel Embiid being the poster star of the season. If you are excited about the Return of Heroes, read on to learn when is NBA 2K22 Season 7 starting, and what rewards await you. 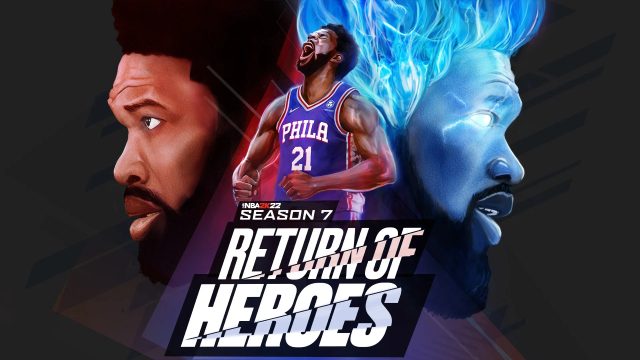 The developers have now officially confirmed when can we expect Season 7 update to arrive. As per the Visual Concepts tweet, the official release date for Season 7 of NBA 2K22 is Friday, May 20th, 2022. We also know the exact time when will the season kick off. The Season 7 start is set for 5 pm CET / 4 pm BST / 11 am ET / 8 am PT. Given that the patch was deployed earlier this week, there will be no downtimes or new patches to download. You will be able to play the game the moment the new season starts.

Asides from all the new content, there are also plenty of rewards for players to claim. Just like before, some rewards will be different depending on the platform you are playing on. Here are level 30 and level 40 rewards:

Of course, there will be rewards for MyTeam players as well. The Level 1 reward in MyTEAM’s Season 7 is Hero Galaxy Opal Zion Williamson. “Zion will need to go solo to start the Season, as the rest of the Galaxy Opal and Dark Matter players you’ll need to complete that Mural will be earned once the NBA’s best compete for their ultimate reward in the Finals”, developers explain. Here’s what else awaits you, as explained by developers:

“Take over with Zion, and prepare your lineup for the Challenger Mural’s collection complete reward: Invincible Joel Embiid. For the Champions assembling their mural, you can look to add these 15 Dark Matter players to your collection in premium releases all Season long. This time around, the reward for completing this collection isn’t a Coach card, but we’ll have more on that epic reward later.”