Xbox Game Pass didn’t see many new arrivals in the last month or so. We’ve got Halo 2 Anniversary of the PC, then a few indie titles along with Alan Wake, and that was it. Yeah, we also got Minecraft Dungeons. Anyway, Microsoft announced a new slew of games joining the subscription service, and there are some pretty good titles there. First of all, the star of the show is No Man’s Sky, which we already talked about. Other big names include a couple of Kingdom Hearts games as well as Thronebreaker, and Battletech.

Xbox Game Pass Gets Lots Of Games In June 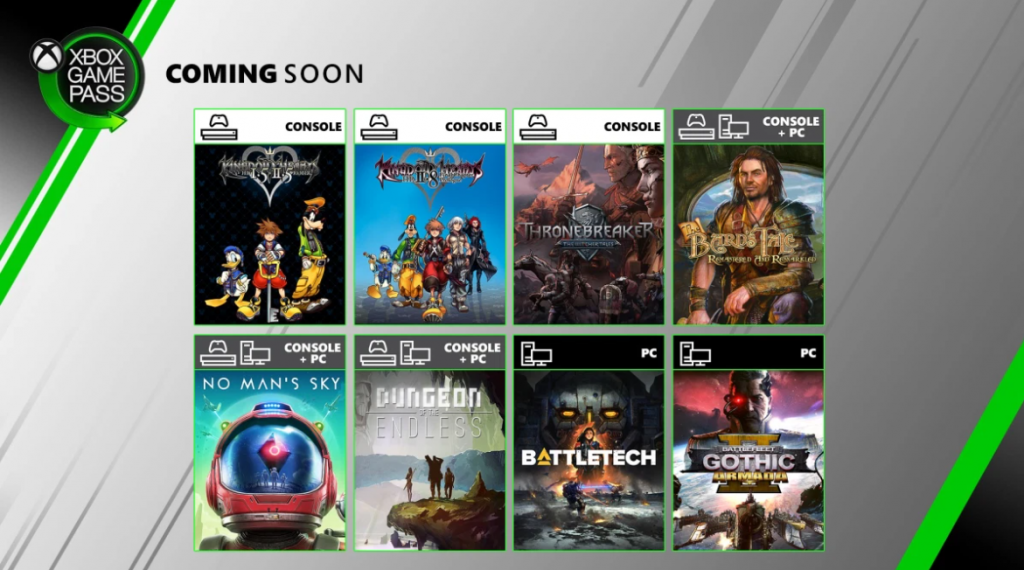 Now, let’s talk about which games are coming to the Xbox One, which are reserved for the PC, and which titles are coming to both the Xbox Game Pass and Xbox Game Pass for PC. Kingdom Hearts HD 1.5 + 2.5 ReMix are the clear favorites on the console. The two games are awesome if you’re into Final Fantasy meets Disney and they offer lots of quality hours of fun. Next is Thronebreaker, Gwent-based game set in the Witcher universe that features an amazing story and cool gameplay. It’s just too easy.

Finally, games coming to the Xbox Game Pass on console and PC are aforementioned No Man’s Sky, The Bard’s Tale Remastered, and Dungeon of the Endless. The Bard’s Tale Remastered and Resnarkled is a modern recreation of the classic RPG from 2004. It’s okay, especially if you don’t have to buy it. Dungeon of the Endless is a roguelike and tower defense combo that sounds interesting. It takes place on an alien world that features a never-ending dungeon filled with treasures but also teeming with danger.

But It Also Loses a Bunch