PlayStation Plus free games can vary greatly. Some months they contain instant classics such as Bloodborne, Uncharted Trilogy, or The Last of Us. Other times, the games can be pretty solid, like when we got Ratchet & Clank, Wipeout Omega Collection, or Batman Arkham Knight. Most months, however, include less than great offerings. July 2020 won’t be one of those months since all PS Plus users will receive Rise of the Tomb Raider, Erica, and NBA 2K20. Yes, NBA 2K20 isn’t the best game on this list but the other two titles are pretty awesome, especially the second part of the Tomb Raider reboot.

PlayStation Plus July Games Are: Rise of the Tomb Raider, NBA 2K20, and Erica 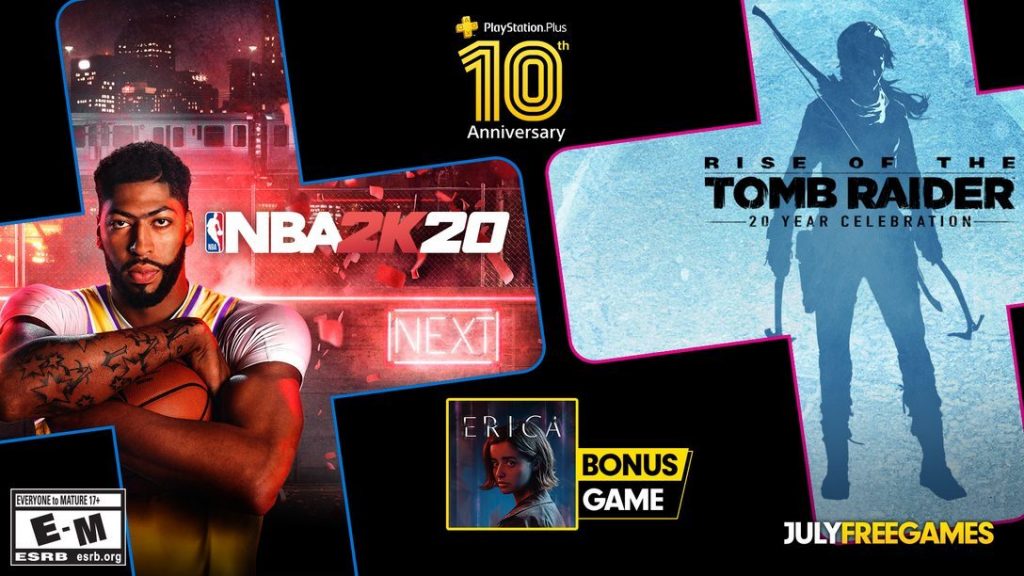 Let’s start with Rise of the Tomb Raider. The second entry in the rebooted series is probably the best of the three. Levels are beautifully designed, with a couple of large, open hubs, that look stunning. Geothermal Valley area is one of the best-looking areas in any game, ever. But being pretty isn’t all that this game has. The gameplay is slick, the story is well written and excellently paced, and each level hides lots of cool collectibles. If you haven’t played Tomb Raider games, get this one and try it.

NBA 2K20 is also a solid game. at least for basketball fans. Career mode is less of a cash grab this year. But, it’s still a cash grab. The best thing you can do with NBA 2k20 at the moment is playing with friends. At least you can warm up a bit waiting for the NBA season to continue in July. The last game, Erica, is the PlayStation Plus bonus game for July, but it’s an excellent game on itself. If you’re into full-motion video adventure titles you’ll love Erica. The game’s a murder mystery with exceptional acting and a story that’s pretty damn good.

NEXT POSTUnannounced Harry Potter RPG In The Works, According To Bloomberg Report