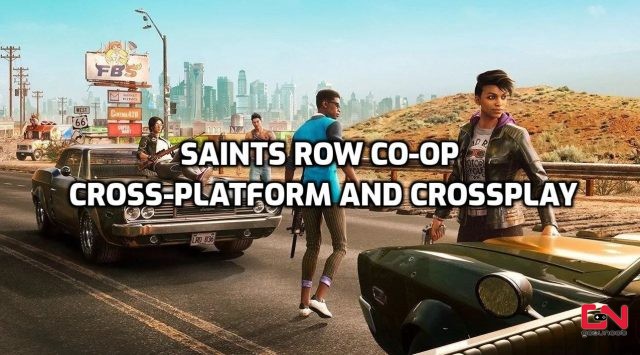 How does co-op work in Saints Row? First off, as we’ve already mentioned, you can’t have more than two players in co-op mode together at the same time. Second, you can play either the entire campaign with someone, or you can team up only for some parts of the story, it’s entirely up to you how you wanna play co-op in Saints Row. The reboot features a drop-in/drop-out co-op, which means that you can jump in and out of someone’s session at any point you want. Both players play as individual bosses, with their own customisation.

Co-op play is untethered, which means that both players can explore the city independently of one another. The only exception is when one player enters a mission, which will teleport the other player to the mission location to help get the job done. When you want to return to your single-player campaign, all collectables, customization, vehicles, and weapons will follow you back, and you will get to keep them. Progression is saved as well. Meaning any mission you have completed in co-op will automatically be completed in your single-player session. Thus, you don’t need to play it again. Finally, the developers state that the game also has “the pranking system” in co-op, allowing you to turn your friend into a toilet, for example.

Is Saints Row Cross-Platform and Crossplay?

Now when you know how can you play Saints Row co-op, what about cross-platform play? Is there crossplay support in the 2022 Saints Row reboot? Unfortunately, we have bad news here. The Saints Row reboot doesn’t feature cross-platform and crossplay at launch. This means that if you game on Xbox, you won’t be able to play with your friends that game on PlayStation consoles. On the other hand, Saints Row features cross-gen play. This means that PS4 and PS5 users can play together. And the same goes for gamers on Xbox Series X/S and Xbox One, they can play between themselves. With that said, that’s all you need to know about Saints Row multiplayer co-op, cross-platform, and crossplay.

NEXT POSTWhen is Saints Row Coming to Steam?

Want to know how to Heel to Ball Roll in FIFA 23? Or simply how…