If you have been on the lookout for something that incorporates a dark fantasy adventure novel, puzzles and bullet hell (perhaps a bit of an acquired taste there!), you might be very interested in Thy Creature. The game itself comes from MazM, a developer that is well known for a unique graphic style. Also, they have several adventure titles in their belt so far. This time around they are pushing the envelope with Thy Creature. The game is in Early Access on Steam since February 19th. 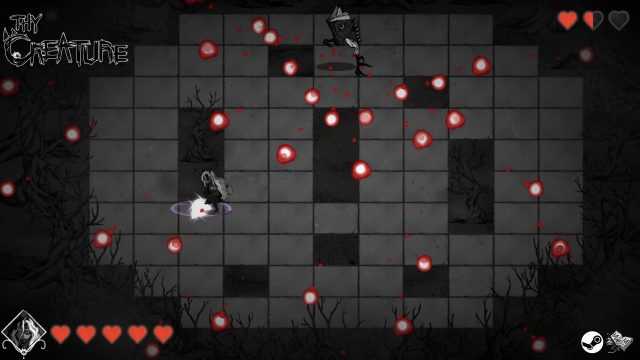 Anyone up for some story-driven bullet hell?

For those who have played earlier Mazm games, you probably know what you will be dealing with. They have a distinct, recognizable style and lean heavily into the adventure and story side of the games. Their Jekyll and Hyde, The Phantom of the Opera, and Pechika have been very popular in the mobile gaming world. Cumulatively, they’ve had over five million downloads. This will be their introduction to the world of PC gaming. Thy Creatures has been in development following a successful Kickstarter in April last year. This means that MazM is breaking new ground here.

With its dark horror themes, Mazm draws on inspiration from the works of Mary Shelley, particularly her most famous book, ‘Frankenstein: Or the Modern Prometheus’. The creatures in the game have escaped humans and are trying to find a way to fullfil their depest desires by climbing a mysterious tower of promises. The adventure will pit the players against both the puzzles and a barrage game system. You can expect a test of your mental and physical reflexes. And, of course, interesting, dark visuals.

The game is out on Steam’s Early Access for 19.99 USD/17.99 EUR/14.99 GBP. We will follow further development of Thy Creatures. You can also expect our review of the Early Access version of the game soon.