Do you want to know what’s new in the Valorant Episode 5 Act 3 update? The next major Valorant patch is slated for release on October 18th, 2022. And, Riot has prepared a whole lot of new content for their tactical FPS. The biggest star is, of course – Harbor, Valorant’s Agent 21. From a technical perspective, we can expect major UI redesign and interface improvements. The new MVP screen is one of the highlights of these UI updates. Then, there are agent and weapon balance changes, map tweaks, and more. Read on to find full Valorant 5.08 Patch Notes. 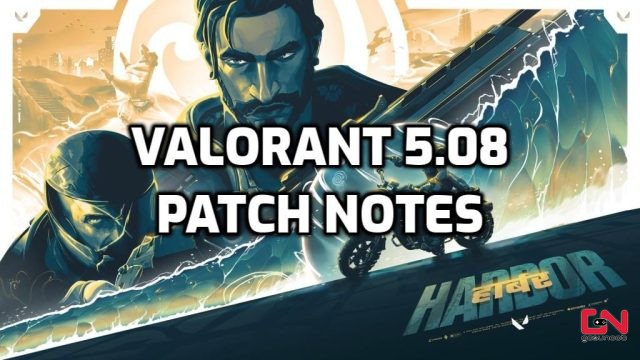 Without a doubt, the thing everyone is the most excited about is the next Valorant agent, Harbor. Agent 21 comes from a coastal city somewhere in India, and thanks to an ancient relic, he has the power to manipulate water. Without further ado, check out his abilities:

EQUIP a wall of water. FIRE to send the water forward along the ground. HOLD FIRE to guide the water in the direction of your crosshair, passing through the world, and spawning a wall along the water’s path. ALT FIRE while bending to stop the water early. Players hit are SLOWED.

EQUIP a sphere of shielding water. FIRE to throw. ALT FIRE to underhand throw. Upon impacting the ground, spawn a water shield that blocks bullets.

EQUIP a wave of water. FIRE to send the wave rolling forward and through walls. RE-USE to stop the wave from moving further. Players hit are SLOWED.

EQUIP the full power of your Artifact. FIRE to summon a geyser pool on the ground. Enemy players in the area are targeted by successive geyser strikes. Players caught within a strike are CONCUSSED.

Furthermore, the next major change in Valorant 5.08 patch comes from the visual department. Namely, Riots’ UX, UI, Engineering, and QA teams have been working hard on UX/UI visual changes. These changes will start rolling out in Valorant patch 5.08. These interface changes are related to non-gameplay aspects of the game. If you wish, you can learn more about these updates in the official blog post. Here’s what Riot states are the key aspects of these changes:

One of the first concrete things arising from these UI changes is the new MVP screen in Valorant. “We want you to understand the importance of the team aspect of Valorant,” says Tea Chang, UX Design Manager.”We also hope this helps you appreciate the beauty of our Agent visuals with a focus on continuity into the end-of-game screens.” Below, you can see the new MVP screens in Valorant, both for the winning and losing teams.

For now, that’s all we know about Valorant Episode 5 Act 3 update. Nonetheless, we will make sure to update our Valorant 5.08 patch notes the moment Riot Games officially reveal all the details, including all balance changes, and more.

PREVIOUS POSTSims 4 Free to Play, How to Get & What Time Does It Start