We are merely a tiny speck in a practically endless universe. There are stars upon stars, stretching into infinity. Man may get a chance to explore beyond our solar system and discover at least a small part of space. No Man’s Sky takes you on a journey, simulating that very thing. To those of you who are unaware, No Man’s Sky is a free-roam space shooter developed by Hello Games and is literarily one of the most hyped titles in 2016. The hype kept growing and now the game has arrived and is met with considerably high expectations from everyone. As much as I was eager to jump onto the space-exploring bandwagon myself, I approached No Man’s Sky with caution. Let’s be rational here. This is a colossal open-world game created by only four people (at least that’s what we were told initially – I believe more people joined the project further down the road). 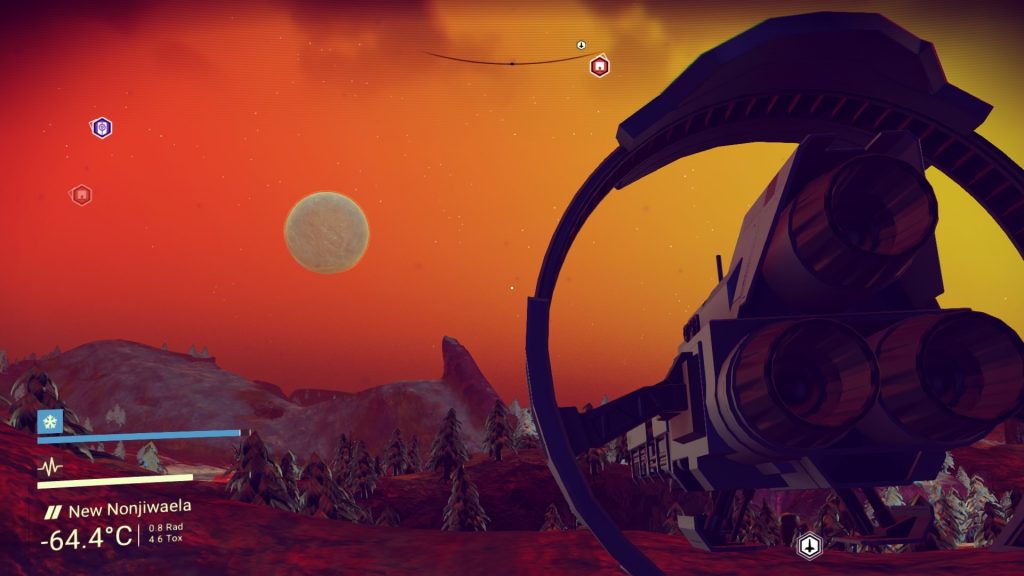 The game starts off simply: players step into the space suit of a completely anonymous character who appears on a random planet in an unknown part of distant space. You need to fix your ship and head out into orbit. It may take you a few minutes to get your bearings, although as soon as you’ve gathered all the necessary resources to repair the ship, your journey towards the stars may commence.

The first 5-6 hours, No Man’s Sky is a thrilling experience. Everything is exciting, new and you can’t wait to find out what lies ahead. First off, you won’t get very far without crafting items, upgrading your suit and ship. This requires resources or rather chemical elements (yep, no Man’s Sk’s has a periodic table of elements, specifically tailored for the game), chief among which appear to be Iron (Fe), Zinc (Zn), Titanium (Ti), Thamium, (Th), Heridium (Hr) and Plutonium (Pu). There are others, of course, but these are the ones you’ll be gathering since they can restore your HP and shield. They are also essential for ship maintenance. Thanks to the game’s procedural generation, a lot of these elements will appear as you start exploring on foot… in any direction, really. Gathering elements is accomplished via a handy mutlitool/firearm (also upgradable). There’s the in-game currency called ‘units’ which are used to buy new ships and upgrades from trading posts and space stations or from other alien NPCs (i.e. space travelers such as yourself). My main goal was to accumulate as much ‘units’ as I could to snatch a snazzy-looking space ship. Screw it, I want a bigger cargo hold, so that I may grind and collect loot in peace. 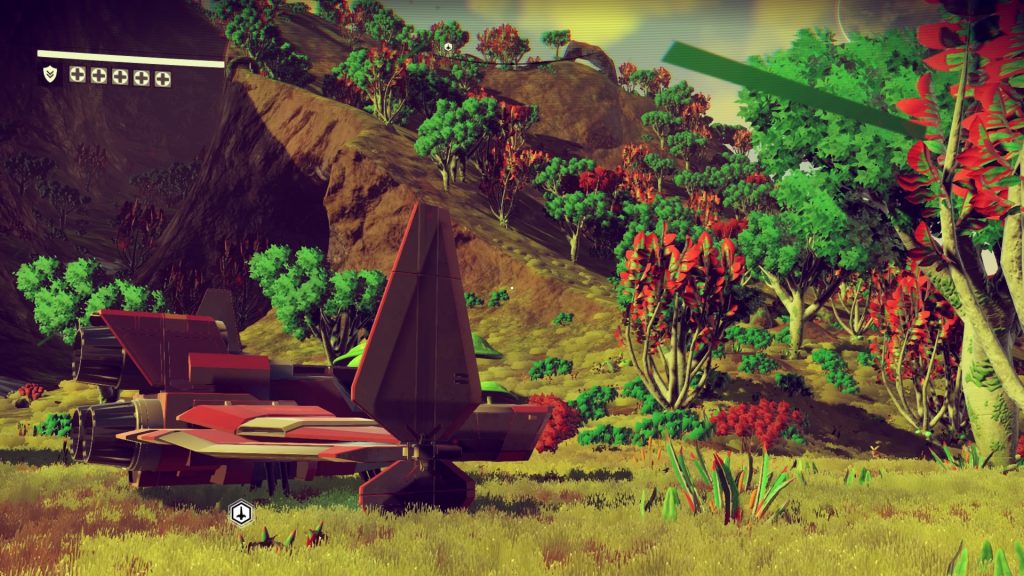 I think that I’ve just explained all there is to it. The only thing that’s left is space shooting. Space dogfights take place randomly, although they are not particularly exciting. Usually, you’ll be blown out of the sky, sorry I meant out of space, depending on the ships defenses. On the other hand, you’ll destroy enemy ships if you overpower them. It’s all over pretty quickly. Think of dogfights as an in-game extra and not a particularly important part of the game. There is no specifically defined enemy in No Man’s Sky. There is no ultimate evil that you are fighting. In other words, if you are looking for a villain to point a finger at, look elsewhere. The universe is incredibly large and mysterious and things are not black and white, in a moral sense. You do what you do to survive and so will every other species.

For players who do not prefer to take their time exploring an infinitely self-generating universe, there’s always the option to follow a straight and guided path towards the center of space itself. It’s a cool concept I must admit and that particular facet could possibly please those who are more hungry to wrap things up in a more linear fashion. While this cannot be construed as a thrilling, unforgettable story, it sort of gives your nameless hero a sense of purpose. It may give more demanding players some closure. 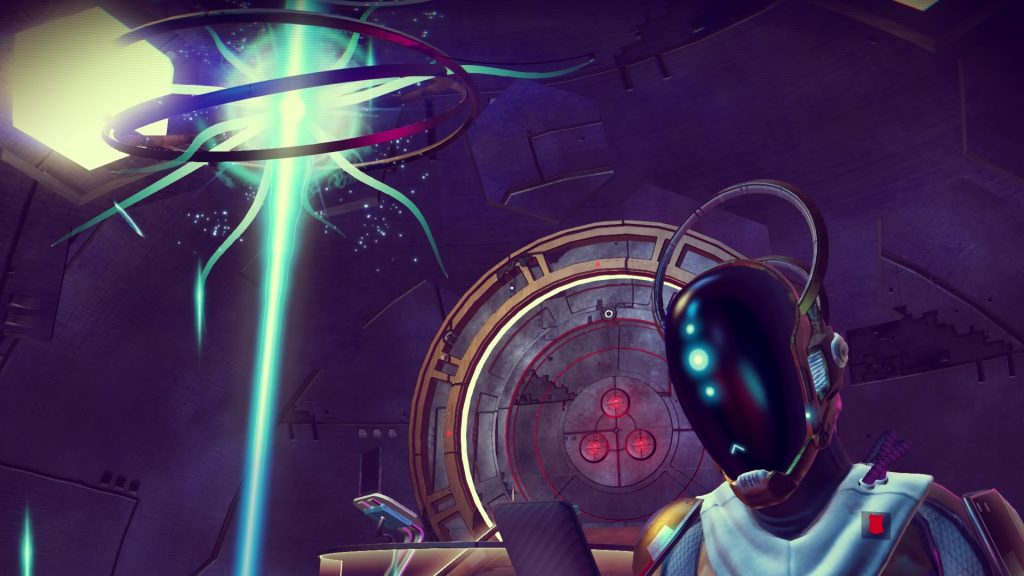 Overall, we do applaud the ambition here. Even so, we cannot deny that all this exploring may bore players to such a degree that they could easily give up on this procedurally generated universe. The absence of a story means there are no specific characters to get attached to. Lack of characterization means lack of personality, which, in turn leads to a rather generic virtual environment. To some people, No Man’s Sky is hiding behind its main trait, which is the freedom to go anywhere, do anything. Unfortunately, a large portion of what you can do boils down to mining, trading, analysing different species of flora and fauna (a.k.a. the grind).

The question to ask is whether or not No Man’s Sky was a scam. Of course, it wasn’t. It was developed as a tribute to the old space exploration classic, Elite (1984). Instead of being served a specific story, it largely required players to use their imagination – as an old-school game would, ya know. No Man’s Sky hinges on a similar sentiment. I realize that this is a bit of a stretch for today’s standards, but it’s down to you – the player.

Technical mishaps weren’t amiss in No Man’s Sky. The game managed to freeze and crash about 7-8 times. The first time a load my save, it freezes or simply causes an error and returns to the PlayStation dashboard. Then I have to restart and reload again. On a few other occasions, it froze after several hours of exploration. Of course, none of the discoveries I made were saved and none of my resources survived either. Now, that was a bummer. Disregarding some of these flaws, No Man’s Sky isn’t necessarily a bad game. It was promoted as a space exploration game with an unlimited number of star systems and planets to visit – and that’s what it is. It did not promise an epic storyline with awesome, super-zany characters. And yet most people will STILL expect that. 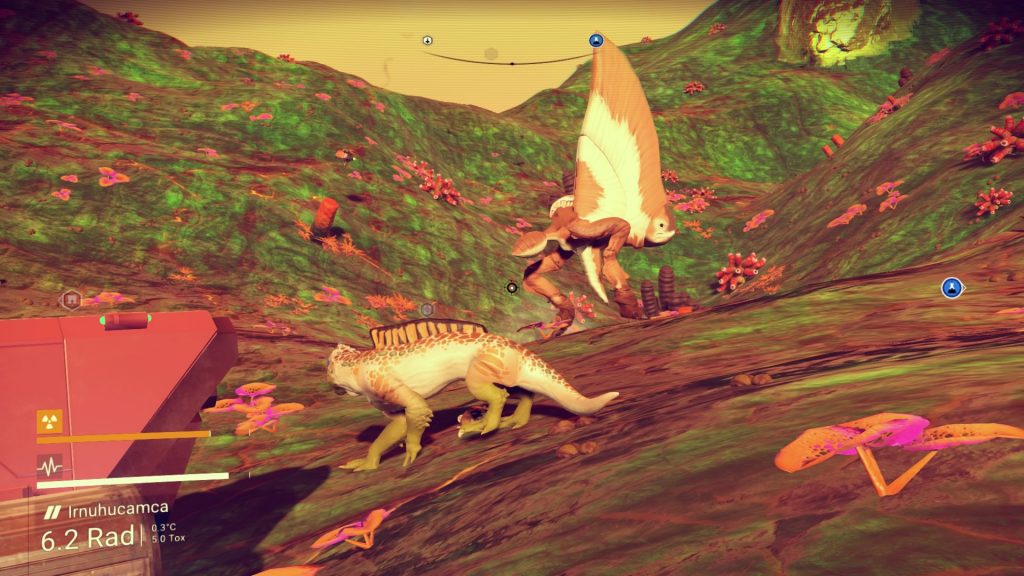 Conversely, there’s an absence of specific missions that might have motivated players a bit more. There should’ve been more to the game other than having to learn different alien words or languages in order to understand what space traders are jabbering about when they’re selling you stuff. Heavy emphasis is placed on grinding, collecting all those damn resources to craft and upgrade ships. Oh yeah, and you can scan and identify a bajillion animals and plants (some of them eerily similar, even if they are galaxies away from each other).

Since there is no multiplayer, gamers will surely have the need to experience a story and as such a lot of them will be disappointed. The story is so poorly told that you won’t be focused on that part of the game at all. And if you remain focused, and travel to the center of the universe, you will most likely come out disappointed again. For instance, Mass Effect had its tedious bits where you could explore planets and collect resources and this feels a lot like that, but with significantly more freedom. However, even the exploration segment of Mass Effect had something No Man’s Sky doesn’t have – purpose and missions; or if you prefer the RPG term – quests. People need a purpose, I’m afraid once they’re done facing an endless realm of stars, planets and asteroids and randomly generated fungus. No Man’s Sky gives you only one optional purpose – to make the journey to the center of the galaxy, but fulfilling that won’t bring much satisfaction and all that’s left after that is more exploration. 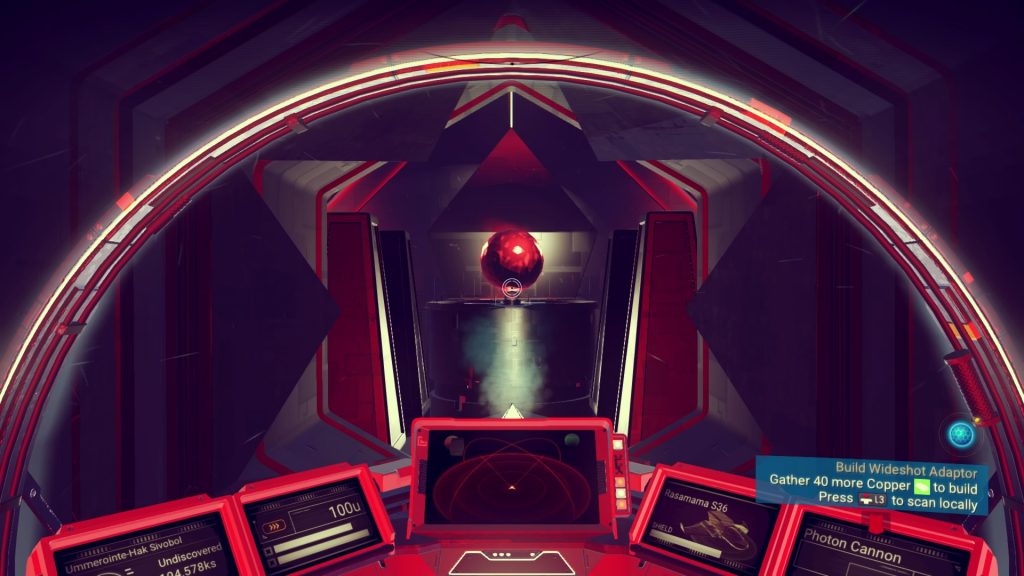 It has to be said that the developers poured a great deal of work into the atmosphere, the planets, and how each environment looks and sounds. The soundtrack throws in one suitable electronic tune after another, contributing to the sci-fi ambience.

So, would I recommend this to everyone? Certainly not. Some are calling it “the ultimate game for OCD explorers.” But chances are that most players will simply get bored after 10-15 hours of grinding for resources in space. Normally, I wouldn’t give much praise to any game that is generic. For some reason though, there is something alluring and mysterious behind every world you visit. No matter how harsh and foreboading it may look at first, every world compels you to keep searching for more space colonies, transmission towers, shelters, alien monoliths or trading posts. It’s easy to get hooked on the exploration factor.

My problem is this: I keep wanting to go back to No Man’s Sky to discover more, just because I can’t shake the feeling that something amazing will happen and I’ll make an epic discovery. Only it never really does. In truth, the repetitive nature of the game and the unending grind may well be NMS’s downfall. Unless the developers make an effort to add more content, in addition to the much sought-after multiplayer mode.