Outer Worlds Flaws are a character’s shortcomings that reward a perk point as compensation. You start the game with none, but as you progress, you’ll get a bunch of opportunities to amass them. They reduce some of your stats, but in return, each gives you a perk point to spend as you wish. On lower difficulties, you can choose whether to accept them or not, but on Supernova, they’re applied automatically. This guide will show you a list of Outer Worlds flaws and how to unlock them.

How to get flaws in the Outer Worlds?

Almost all of the Outer Worlds flaws are unlocked by being damaged enough times by a certain type of enemy, kind of damage, or in a certain place. Fall off a cliff one too many times and you will contract Acrophobia. Get hit by certain type of enemy and you’ll get the associated phobia. I fought primals in the first zone for about 4 minutes and let them hit me while healing. After I ran away from them and was out of combat I got the flaw activation.

This will lower your primary attributes and affect great many of your skills. All of a sudden you won’t be able to hack that door or kill monsters as quickly with that 1-handed melee weapon. However, if you are looking to maximize your build and are lacking a perk point then you want to just embrace the negatives and plough on. Some Outer Worlds flaws may not be that detrimental to your specific build. Important thing to remember that most phobia type flaws are active only while you fight that particular type of enemy. Your stats in other fights remain unchanged.

Listed bellow are all the Outer Worlds flaws you can get . You can also see which stats are affected and how to get each. We’ll get into a bit more detail for each discussing which negative effects you get and how impactful they are to your character. Remember that once you choose to keep a flaw you will not be able to remove it.

Acrophobia is supposed to be one of the easiest Outer Worlds flaws to obtain. Just find a ledge you can easily climb up on top of and then leap to receive fall damage. Still, it takes a great amount of falls for the flaw to become active. I did it for over 30 times and about 10 minutes and still didn’t get it. You’ll get your primary attributes dexterity, perception and temperament lowered. This hurts your reload speed and melee swing speed, but also lowers your skills

All of these Outer Worlds flaws are obtained by getting hit by a specific type of enemy. Get close to the specific enemy type while sporting some health regen buffs and let them hit you. You can then run around to regen health and let them hit you some more. After about 4-5 minutes go out of combat by running away or killing them. Flaw should trigger about then. It did for me when I tested it with Canids in the first zone at least. Cool thing about these flaws is that they are active only when you are fighting that specific enemy type. If you think you will not encounter many important Canids in your playthrough and need another perk point desperately, maybe Pithecophobia flaw is for you. 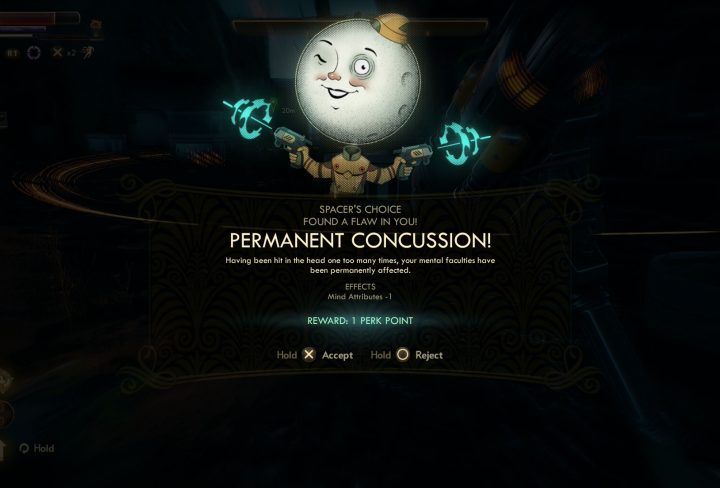 Outer Worlds flaws system is an interesting mechanic that will certainly spice up your playthrough. Playing on Supernova difficulty is going to require you to avoid all types of damage to be able to avoid flaws. You might just embrace your flaws and compensate with extra perks. Whatever the case we hope this article helped you define your character a bit more, flaws and all. Feel free to check out our Youtube Outer Worlds playlist for more useful content.