Are you an excited OW2 fan who wants to know when is the Overwatch 2 second Beta? Overwatch 2 was one of the games featured during the Xbox Bethesda Games Showcase 2022. And the most exciting part? We finally have a release date! The PvP component of OW2 is slated for the release on October 4th, as a free-to-play early access title. But, before that, there will be a couple of more betas. In this article, we explain when is the OW2 second beta and how to sign up for it. 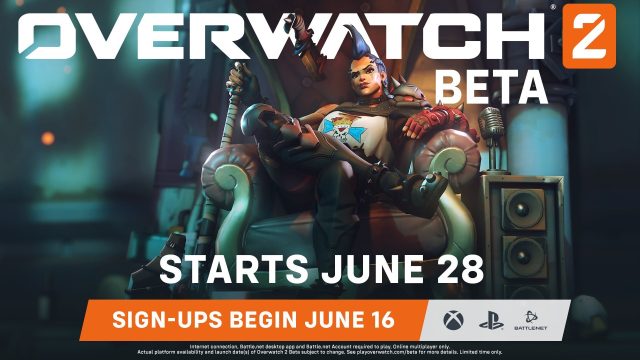 When is Overwatch 2 2nd Beta?

The first Overwatch 2 beta was held back in May, and now, after the PvP release date reveal, it’s time for another round of beta testing. Of course, this beta build will be vastly different, featuring the newly-revealed Junker Queen hero, a yet unannounced new map, balance changes, new features, and more. We will find out more details about all the new content in a couple of days, during the Overwatch 2 Reveal Event. The 2nd Overwatch 2 beta itself is set to start on Tuesday, June 28th, 2022.

The beta signs up will open up right after the Reveal Event ends, on June 16th. The stream is expected to last around an hour, and then what you’ll need to do is to follow these instructions:

Keep in mind that, just like the previous beta, this one is not an open beta as well. This means that even if you sign up, that’s not a confirmation that you will be accepted to participate. However, there will probably be more Twitch drops again. Thus, even if you don’t get invited via sign-ups, you can always watch some OW2 stream for a chance to win a beta code.

NEXT POSTWhen is Valheim Coming to Xbox Game Pass