Thanks to its many appearances in Pokemon-related media – most notably in the Detective Pikachu movie – Psyduck has become one of the most iconic Pokemon of all time. Of course, this means that it is also present in most Pokemon games, and Pokemon Brilliant Diamond and Shining Pearl is no exception. But, like many other Pokemon in BDSP, acquiring a Psyduck and then having it evolve into Golduck takes some effort and knowing where to look and what to do. Our Get Psyduck & Evolve Into Golduck in Pokemon BDSP guide will explain where you can find a Psyduck and what’s required in order to evolve it to Golduck. 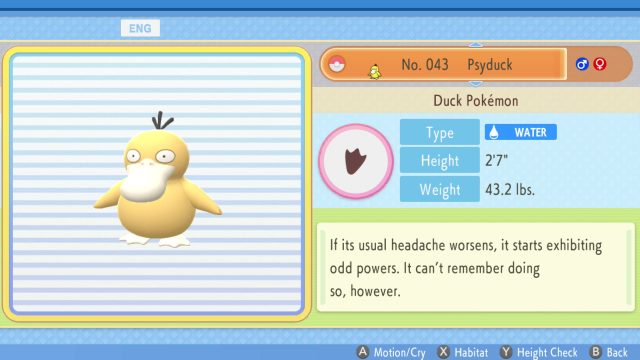 How to Get Psyduck in Pokemon Brilliant Diamond & Shining Pearl

The most reliable way to get Psyduck in Pokemon BDSP is to go and use Surf to Route 203 and Route 204. You have a whopping 90% chance of getting a Psyduck there. However, you will get access to Surf later on in the game. If you want to have a Psyduck earlier than that, then what you will need to do is, after you have completed the First Gym and acquired the Rock Smash Hidden Move, go inside Oreburgh Gate. Use your Rock Smash to clear out the rocks in your way and proceed to the level below. At this level, there is a 30% chance that you will encounter a Psyduck. Keep moving around until one spawns.

If you want to evolve your Psyduck into Golduck (and why wouldn’t you), the process to do this is really simple. All that you need to do is to level up your Psyduck until it reaches Level 33. Once it does that, it will then evolve into Golduck. So, unlike some other Pokemon which can require certain items such as the Fire Stone or Dusk Stone, Psyduck just needs to level up.