Not sure how to fix the Pokemon GO Error Claiming Battle Rewards issue? You’ve come to the right place! Season of Light has just kicked in, and players are getting ready to enjoy all the new seasonal content. Those of you with a competitive spirit are getting ready for the next season the GO Battle League. However, the new season started with one unpleasant surprise – a number of players can not collect their end-of-season rewards! Worry not, we have a solution. In this guide, we provide a fix for the “Error Claiming Battle Rewards” in Pokemon GO. 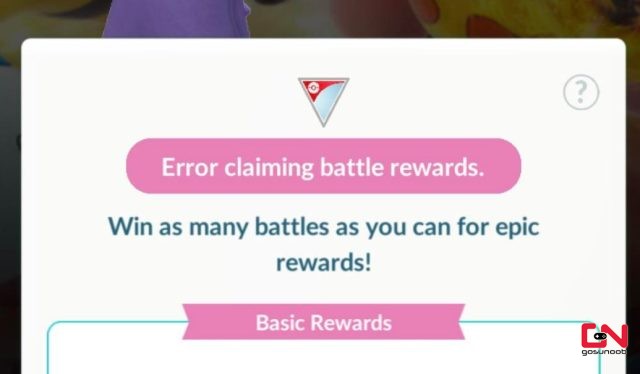 The GO Battle League Season of Light is upon us. Players are getting ready to test their mettle with other trainers and show them who’s the best among the best. Before the start of the new season, players’ GO Battle League rank will be reset. The good news is that the rank-up requirements will remain the same as in the season behind us. However, there’s bad news as well – players are unable to claim their end-of-season rewards from the battle screen! Instead of claiming them, they receive an “Error Claiming Battle Rewards” message.

This, naturally, can be rather frustrating as players are eager to enjoy their hard-earned goodies as soon as possible. Luckily, this is an easy-to-fix issue. In most cases, the fix is to simply make some space in your PokeBox/storage. Players often forget that their Pokémon storage is full. And, unfortunately, the game doesn’t inform you that you are full to the brim, leaving players wondering why they can not collect their rewards and why is this error happening.

If you have space in your Pokémon storage and you are still receiving the Pokemon GO Error Claiming Battle Rewards message, then the problem is probably not on your side. If it’s not because of the full Pokemon GO storage, then it’s because there is some server issue preventing the game from communicating with the servers and give you the rewards. In that case, simply wait until the server issue is fixed. Don’t worry, your rewards aren’t going anywhere, you’ll just need to be a bit patient.