Watt traders are a kind of merchant in Pokemon Sword & Shield. There are seven of them across Galar, and they don’t accept regular currency. Instead, they only take watts. Their inventory is on a rotation – each day, they’ll sell different items from a unique pool. Since there are items only they sell, when you want to buy something from one, you’ll have to visit them all to find it. This guide is going to show you all watt trader locations in Pokemon Sword & Shield.

Where to find Watt Traders?

There are seven of them, all in the central area of Galar. Coming from the north, the first one is in Hammerlocke Hill. The next one’s at Giant’s Cap, on the west side of the park. You’ll also find one at Bridge Field, south of the bridge. Continuing south past Motostoke, there’s one at East Lake Axewell at the top of the park. Two more can be found in the east, at Giant’s Seat, and west, at Dappled Grove. The last watt trader is at the Meetup Spot, on the south side of the park. 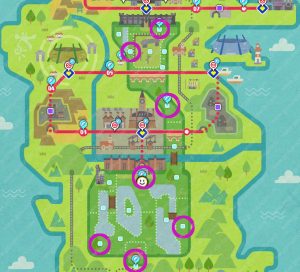 Among other things, they sell several of the special poke balls, like Dusk and Heal. They also sell moves and attacks, as well as consumable items. Last but not least, they are your gateway into the wonderful world of Rotom Rally.

It’s quite a shame your bike doesn’t actually generate electricity. The wheels spark as you ride it, but whatever electricity is produced there isn’t converted into your watt wallet, which means it’s probably just wasted. It would’ve been a nice gimmick, and it would probably force you to explore and ride around a bit more, instead of relying on fast travel. Plus, it would promote healthy habits. Oh well, there’s always next time.