One of the most popular games during the pandemic lockdowns of 2020/2021 was Animal Crossing: New Horizons, Nintendo Switch exclusive casual life sim. The game provided the perfect escape trajectory from bad thoughts, bringing good-natured fun that relied on systems favoring routine and grind. Such combo proved to be both addictive and therapeutic, demonstrating the emergence of a massive audience for big-budget casual games. People liked the absence of danger, messing up, or dying in Animal Crossing. Incremental progress, laughter, and growth for the price of being a little persistent were the winning formula.

It’s a bit puzzling why, until now, almost no one has attempted to copy that blueprint and release a comparable multiplatform title. You could argue that Stardew Valley nearly achieved that ideal, but the pixel aesthetic and limited scope wasn’t everyone’s favorite. Disney and Gameloft decided to exploit that market opening by developing Disney Dreamlight Valley, the licensed juggernaut that pulls no punches while trying to get under your skin. Gameloft spent the last decade perfecting the “art of seduction” in the mobile space. The company that created free2play games unrivaled in their ability to hook the player proved to be the perfect partner. Coupling that expertise with an unlimited budget and the greatest entertainment lore of all time offered by Disney (and Pixar) resulted in this monster. 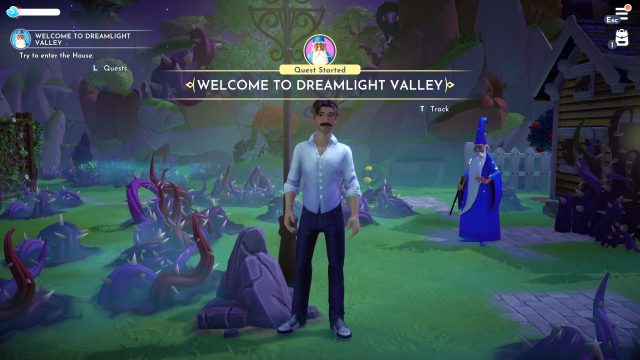 Disney Dreamlight Valley is a hybrid between a life sim and an adventure game set in the aforementioned valley suffering from a magical malady. The classic Disney and Pixar characters such as Mickey Mouse, Goofy, Buzz Lightyear, Remy, and dozens of others lived in a harmonious utopia until a bad actor unleashed Forgetting, demolishing the community and scattering everybody. Forgetting not only made everyone forget about their home, friends, and purpose but manifested itself in environmental decay. Diabolical thorns that now dot the once picturesque landscape; meadows and homes, once full of joy, now ring hollow.

A silver lining in that stormy cloud comes after the dreamer, you, find themselves inside the Valley. Guided by Merlin, you’ll start the arduous process of solving the magical enigma, bringing everyone around while restoring their memories and befriending them. You’ll also do a lot of digging, planting, harvesting, cooking, mining, fishing, crafting, and decorating. The game is an activity powerhouse designed around resource grind and some lighthearted riddle-solving. Initial pacing is carefully calculated not to overwhelm the player; only after a few hours of step-by-step introduction will you begin to realize its full scope. It never becomes too complex, though. It expands only in the “flat plane”, giving you more stuff to do while retaining the low complexity. Dreamlight Valley is quite suitable for young children, its only requirement being command of one of seven supported languages.

Friendships You Must Work For 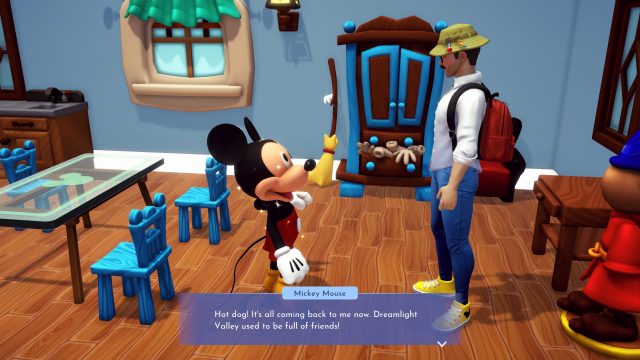 Disney Dreamlight Valley revolves around characters and resources. Unlocking each new Disney/Pixar hero or villain requires completing their questline, which mainly involves grinding some stuff. To get Ariel, for example, you must obtain wood, ropes, and other mats for fixing the raft that’ll take you to her island. Some resources, such as hardwood, can’t be found in the starting zone. You’ll need to unlock areas adjoining the meadow, and for that, you’ll need Dreamlight.

Dreamlight, the game’s core resource, is a magical substance earned as a quest reward. You can also get it after completing mini achievements. Some of those, such as mining a specific amount of minerals, are randomly assigned and repeatable, while others are permanent and cumulative. You’ll mostly use Dreamlight for unlocking the new zones; some of those are a temporary home for lost characters you must bring back to the valley. For instance, unlocking the Remy, Moana, and Wall-E requires 3000 Dreamlight each. This amount you could earn with an hour or two or a persistent grind.

After the rescue, the next item on the agenda is building friendships. You can spam-level affection by gifting random items, but the biggest influx comes from completing their quests. One thing always leads to another here; those quests usually open something new, either a new resource, questline to some other character, etc. Apart from resources, some quests require light puzzle/riddle solving. Rescuing Ursula, the baddie from the Little Mermaid, means solving a simple three-tiered riddle involving idols and magical barriers. 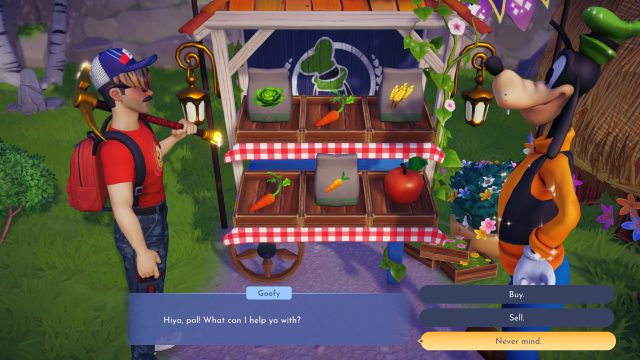 Completing quests, opening chests, and shopping in Scrooge McDuck’s shop get you various clothing, furniture, and decorating items. The game is a customization paradise, as the number of things you can wear or put in your home is mind-boggling. Many decorative items are craftable, setting you on even more resource-gathering trips. The game has a separate cash economy – all the stuff you grind, make or cook can be sold to Goofy. Earned money you’ll mostly use for building the dwellings for rescued characters and repairing stalls and fast-travel wells in newly unlocked zones. Also, you can invest it in upgrading your home or adding additional rooms and furniture/decorations.

Finally, there’s energy management. Mining, gardening, and other manual labor spend energy, which you can replenish either by visiting your home or eating. Cooking is fun here, as you can experiment with various ingredients and discover new recipes. Higher-tier meals fill more energy and offer other potential benefits, such as increased movement speed. 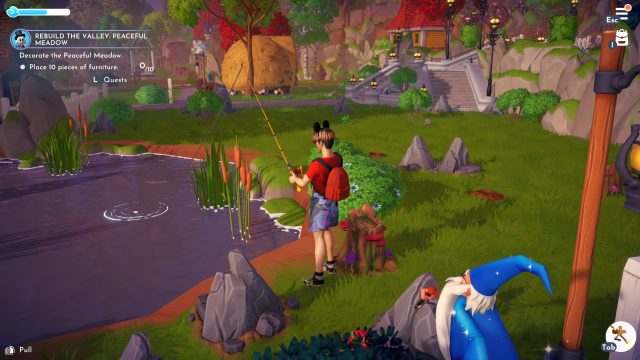 Disney Dreamlight Valley is a casual but richly produced life sim aimed at the broadest possible audience. By combining Gameloft’s industrial know-how in addiction-inducing gameplay systems and Disney/Pixar cinematic lore, they created a cute monster that’ll put its claws inside your brain if you let it. However polished it may seem, it’s still under construction. Starting on September 6, 2022, the game will be available in Early Access for players who purchase a Founder’s Pack. You can also get it via Xbox Game Pass ahead of the game’s free2play launch in 2023.