Everspace was the surprise indie hit from 2017. that boldly experimented with fusing space shooting mechanic with rogue-lite concepts. The game was challenging, sinister, and full of procedurally generated nasty surprises, demanding persistence and firmness under the ever-mounting pressure. I will always remember becoming aware of the gunky layer of sweat on the joystick after slowly coming out from an unnatural focus state that I needed to finally beat it. It was pure ecstasy and cold-eye shivering plasma exhilaration, mega-feeling that I will remember as long as I live. 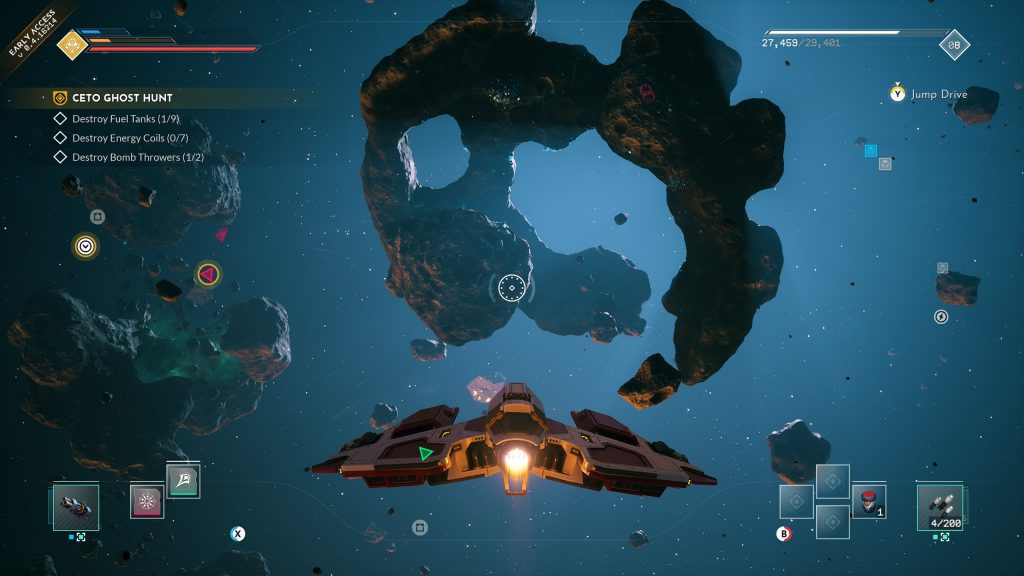 I’m pretty sure that I will forget about Everspace 2 much sooner than that. Instead of evolving the same brave vein of ideas, the developer opted for the safer approach, formulating the sequel as a simpler variant of Elite augmented with ARPG and looter-shooter mechanics. There’s nothing wrong with that, the game feels solid and competent even in this early access state, but the thrill is gone. 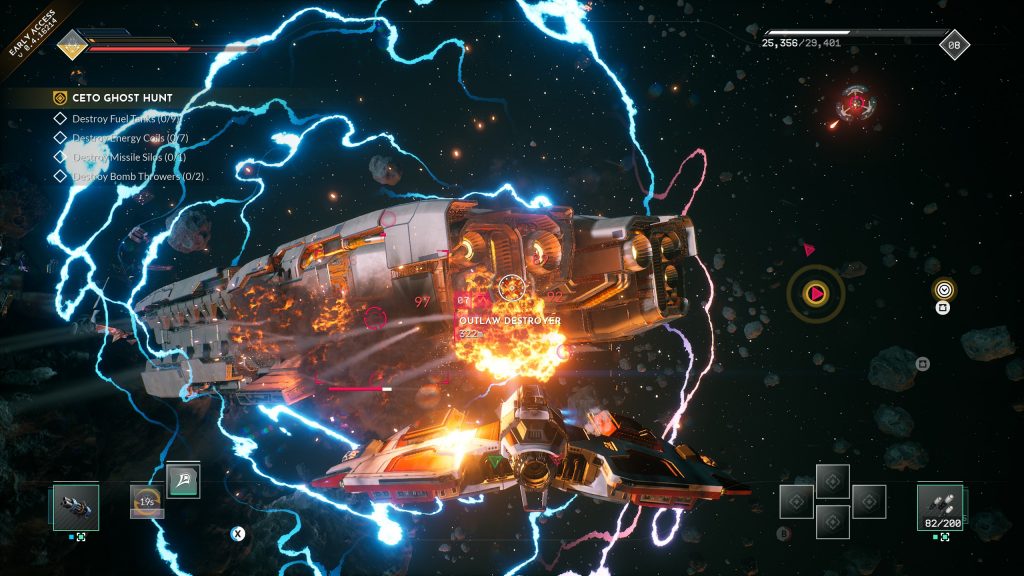 Story-wise, Everspace 2 is the direct sequel, continuing the narrative from the perspective of one of the surviving fleet clones that went underground, working as an escort combat pilot for the mining company in one of the fringe sectors of the galaxy. Of course, Fate had a different plan, and pretty soon, his past would catch up with him. I don’t know if anyone still remembers Tachyon: The Fringe, obscure Privateer clone from 2000. with Bruce Campbell in the leading voice actor role. The primary layer of Everspace 2 is very similar to that (heavy) story-driven space adventure in the open environment. There is a strong, fully voiced main narrative with a series of quests that lead to the campaign’s conclusion and many optional missions and activities to rack up a respectable amount of content. In the early access version that just premiered on Steam, you can experience the first dozen hours of everything, enough to get a reliable picture of what you’ll get in the finished product. We still don’t know anything about the endgame save for the fact that devs are planning it. Also missing is Mr. Campbell’s charisma – Everspace 2 voice acting is relatively unremarkable, even amateurish (so far). 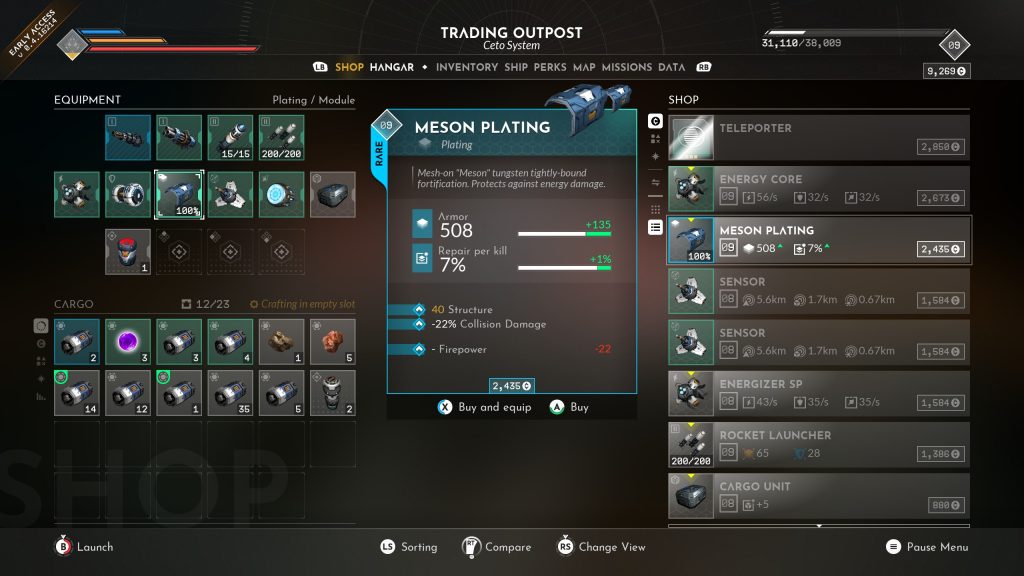 Due to the strong looter-shooter ARPG elements, Everspace 2 mostly feels like a weird but functional crossover between Tachyon and Destiny 2. You’ll equip your ship with color-coded loot in the same way you would equip your Guardian, placing weapons, shields, armor, and gadgets on your flying avatar, raising the combat ability & survivability, and deciding about unique armaments that differ you from everyone else flying around. Combat is fairly straightforward and revolves around peeling the layers of opponents’ ships one by one, shooting them in a manner of classic WWII close shave dogfight. It’s exciting and feels very polished even in this early phase. 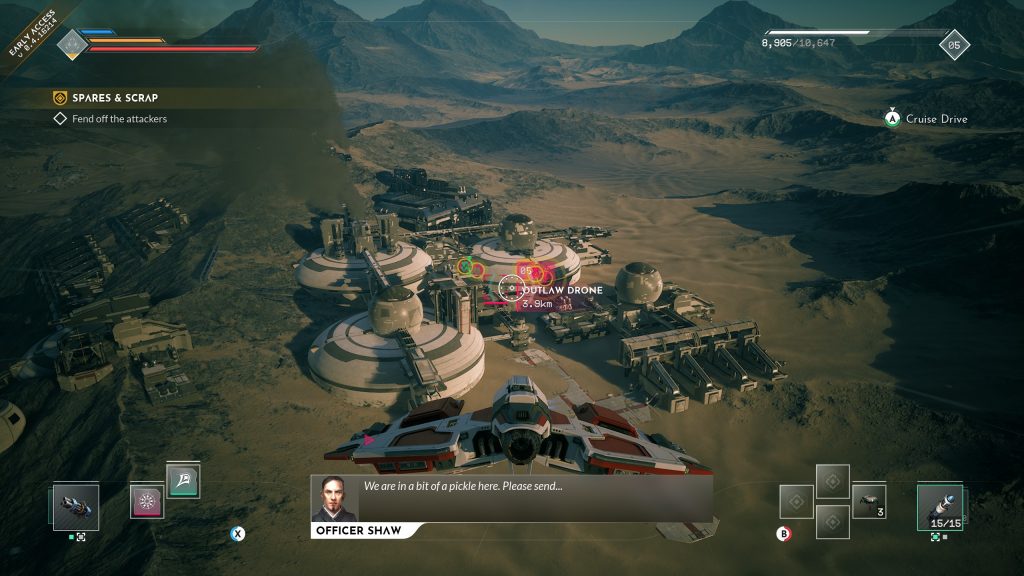 First, you will tackle his shields, using the weapon that primarily deals energy damage; after that, you’ll scrape away his armor plating, firing kinetic armaments, and finally, you’ll get to burn his outer hull using whatever. The damage model doesn’t deal with subsystem damage, although it supports causing ship-wide debuffs like EMP shutdown and targeting and destroying turrets on destroyers or larger ships. Using missiles, mines, or special combat gadgets is the key to winning the fights with multiple foes, and managing the cooldowns for best attacks or defense measures is an essential skill, better learned fast. 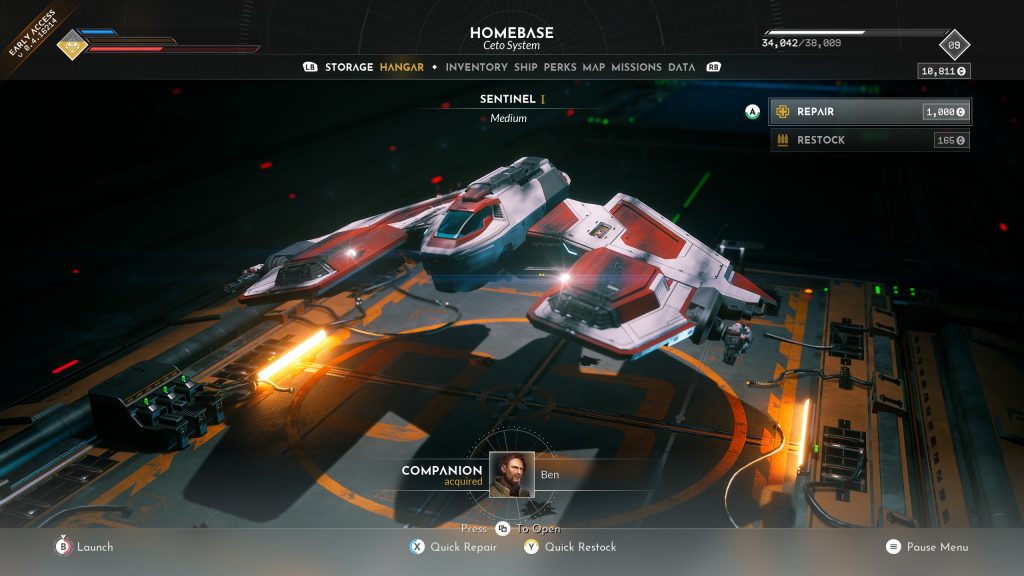 Manoeuvering is also relatively simple as the default mode of flying feels like hovering with just a bit of forward momentum. HOTAS system is preferred but not necessary as you could quite competently play using a gamepad. The great new thing is the combat inside a gravity well, as they would say in The Expanse universe. Skimming the planets’ surface looks very cool, and default low flying speed allows for the calm appreciation of the terrain and planetary features. 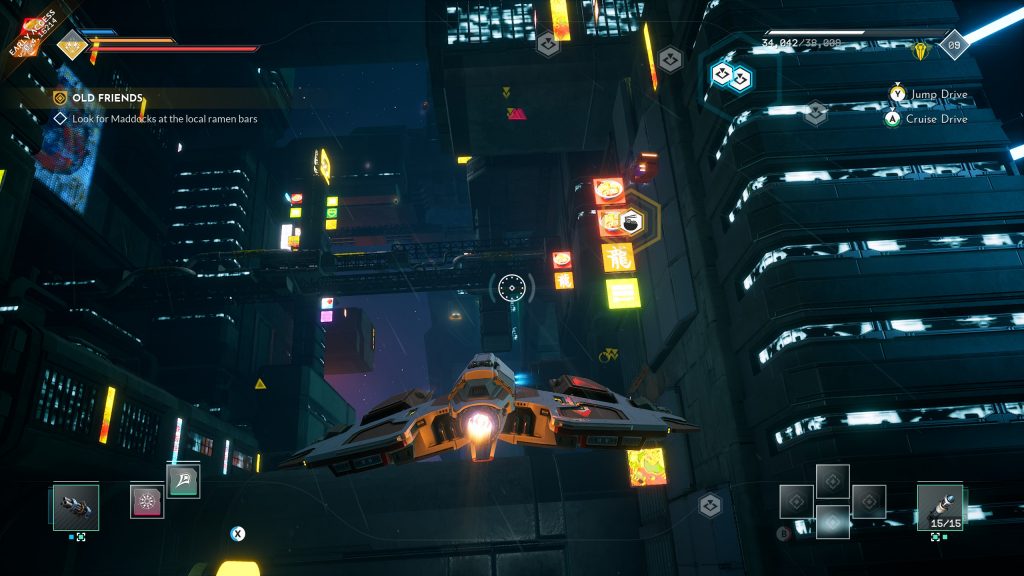 No longer a rogue-lite, Everspace 2 is the classic “save almost anywhere” type of game with absolutely zero risks involved. The game automatically saves every time you dock with any station or enter a system from the hyperspatial travel mode. If you get blown up during the mission, you’ll simply load auto-save and try again, or opt for a bit of freelance side work for getting the better equipment or extra level that would make things easier. Leveling up raises your global combat capability (critical chance, durability, etc…) regardless of the ship you are flying or weapons and gadgets you are using. There is also a well-thought-out system of passive bonuses provided by your companions. Each of them is tied to one or more benefits, such as global reduction of repair costs, an additional range for your tractor beam, or something else entirely. Those benefits, i.e., permanent augments, are tiered – initial, and each subsequent unlock is dependant on investing different resources you can get by trading, mining, or stealing. 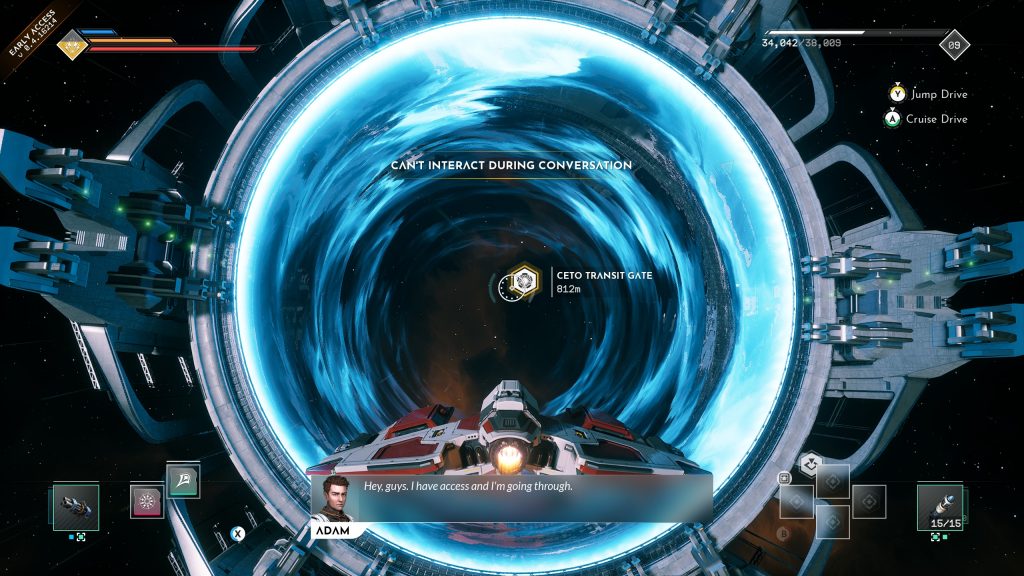 Trading, fighting, exploring, mining… Those are staples of the open-world space shooter genre from the days of the original Elite (1984). Similar games are not the precious rarity these days, especially after Elite: Dangerous renewed the global interest for that particular gaming niche. Everspace 2 tries to capitalize on that, offering an additional Destinesque layer for loot obsessed players but losing the essential pieces that made Everspace unforgettable. Everspace 2 looks great, works great, but stomach butterflies are silent. Maybe you don’t mind the different path that devs took with the sequel, but some players surely do.